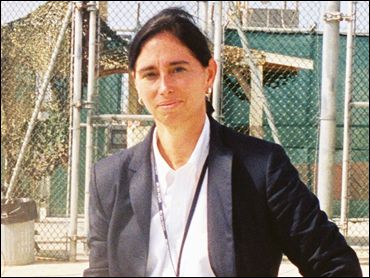 The paint is drying on the newly renovated Commission building on McCalla Hill at the U. S. Naval Base at Guantanamo Bay, Cuba, or GTMO, where the military trials of six suspected terrorists from the Afghanistan war may very well begin soon.

Last week, I traveled to the base on Cuba's remote eastern tip with Defense Department approval. (There is no other way a visitor would be permitted to enter the base.) Some 680 foreign nationals from the Afghan war have been jailed at GTMO for 18 months. I half-expected to see the detainees in small, exposed cages. Photos of orange jumpsuit-clad Muslims in leg irons and wrist cuffs, blindfolded, ear muffed and on their knees behind barbed wire in 6 by 8' chain link cage style cells had been featured by news outlets around the globe.

But I found on my three-day, heavily guided visit that the treatment of detainees has improved. The prisoners are housed in a reasonably well-run detention facility supervised by Command Sgt. Major John Van Natta, a reservist who is superintendent, or warden, of the largest medium-security state penitentiary in Indiana, Miami Correctional Facility.

The chain-link cages of Camp X-ray are no longer in use (although I was allowed to see them). Prisoners at the newer Camp Delta eat three square meals and receive medical care on a par with the 2,800 military personnel at the base.

They also have a military-supplied Muslim chaplain, with call to prayer five times a day and an arrow pointing to Mecca with the mileage posted in each cell. Their request for badminton equipment and soccer balls has also been honored.

The much larger question - whether their imprisonment is justified - has become the most important issue both for the U.S. and the nations with citizens on trial. The moral, legal and political questions surrounding their imprisonment remain unanswered.

Indeed, it is not clear that the Defense Department or the White House have even articulated a consistent rationale to themselves, so it is not surprising that questions about the why's of the detention - rather than the physical conditions under which the prisoners are kept - received fuzzy answers.

And the boast of my Guantanamo hosts that the average prisoner had gained an average of 13 pounds and enjoyed better health care than in Afghanistan had become less relevant.

In terms of criminal law, the question is whether the government has swept up innocents along with guilty culprits. Plainly, if the Afghan detainees are active terrorists ready to resume attacks on U.S. civilians, it would be folly to release them.

Some clearly are terrorists, and have taunted the U.S. guards I spoke with, re-enacting the 9/11 attacks against the World Trade Center and swearing to kill Americans.

PFC Lonnie Morren of Grand Rapids, Mich., told me that these detainees used their hands and arms to simulate a hijacked airliner and then made explosion noises when the "plane" struck a brick wall that was supposed to represent the World Trade Center.

Affording these detainees the full panoply of due process rights, including Miranda warnings and the complex safeguards accorded Americans accused of crimes, may not be rational or legally or morally required.

But fundamental fairness also requires there be a high degree of likelihood that we are detaining real terrorists.

The Bush Administration asserts a good-faith belief that the detainees present a clear and present danger to the safety of Americans.

"Every detainee at Camp Delta was captured on the Afghan battlefield," said Major General Geoffey D. Miller, commander of the of the Joint Task Force (JTF-GTMO), that runs the detention camps .

Miller was echoing Mr. Bush's comment that all the suspects in the camps were there for a reason. Even so, there is a danger - well anticipated by the founding fathers who banned the Writ of Attainder - that the good-faith supposition of the executive may be mistaken in some cases.

Lt. Col. Barry Johnson, the Public Affairs Officer of JTF-GTMO, told me that they recommended to Washington the release of a significant number of prisoners because either they are not dangerous or have provided whatever information they had.

Nevertheless, Mr. Bush announced two days before my visit that six trials of suspected terrorists before a military commission, or tribunal would go forward. It appears, however, that even if acquitted of war crimes, these detainees may be remanded for indefinite imprisonment pursuant to Mr. Bush's Executive order of November, 2001, and the later enacted Military Instructions.

The Bush administration has been under increased pressure from several nations with citizens at the base, where the detainees are nationals of 42 countries.

U.S.-U.K. relations have been strained, and Prime Minister Tony Blair has been criticized widely for the detention and possible death penalty regarding Moazzam Begg and Feroz Abbasi, two British terror suspects who are among the six to be tried. Blair faces a motion before the British parliament, signed by over 200 members, to protest the military trials of British citizens.

While the foundations for building a courthouse at Guantanamo have been laid, there are still no ground rules - let alone clear constitutional authority - for determining the basis for detention. The applicable substantive law, the standard of proof and constraints on civilian counsel have yet to be clarified.

I visited Guantanamo eight years ago when President Clinton used the base as a holding pen for the Cuban and Haitian refugees. They were in a different legal limbo. Some things have changed but much about the base and its mission remains the same.

It is still home to the only McDonald's in Cuba; the anomaly of having a U.S. military base on Castro's Cuba continues to confound the average American.

But the real question for Guantanamo is whether history regards it as the place where human beings were stranded without rudimentary justice or whether, as at Nuremberg, it is a place where murderous war criminals were brought to justice before the world.

These are military trials after all, not designed to afford detainees the rights and privileges of Americans. With the trials about to begin, the judgment at Guantanamo - and the jury - is still out.