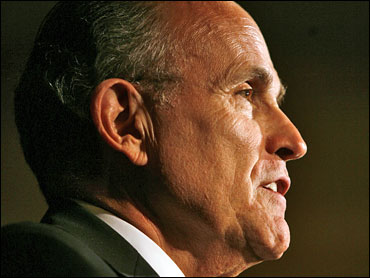 Rudy Giuliani's run for the Republican nomination for president took another interesting turn this week when we learned his daughter, a recent high school graduate who's headed for Harvard, has at least expressed interest in the candidacy of Barack Obama.

Her name was found on an Obama Web site, and she describes herself as liberal on her Facebook Web page. Now we know that New York's former mayor is not on great terms with his kids. But this is one of those revelations that would give any candidate pause.

Republicans view themselves as pro-family, as in "family values." As in, dad's in charge. Rudy's kids left that reservation a long time ago, and it reminds me of another Republican politician who won a bit of success despite a couple of kids who were less than enthusiastic about his politics.

Does the name Ronald Reagan ring a bell?

Ron Reagan Jr. and Patti Davis were forever thorns in their parents' side backs in the day. Might Rudy get the same pass?