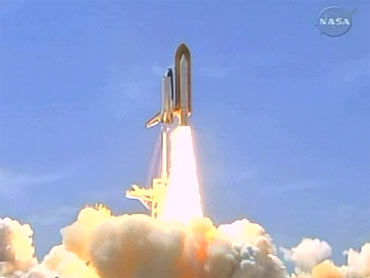 A problem in the boom of Atlantis threw a wrench into the crew's plans for inspecting the shuttle's carbon composite nose cap and wing leading edge panels Saturday.

It appears a cable is snagged in the mechanism, preventing a laser/camera scanning system from being correctly aimed.

Flight controllers at the Johnson Space Center have asked the crew to use a different set of sensors that does not require such precise aiming and to follow a so-called "late inspection" protocol that focuses on the most critical areas of the shuttle, skipping other, less sensitive regions, , reports CBS News space analyst William Harwood.

Additional inspections can be carried out, if necessary, after Atlantis docks with the International Space Station early Sunday.

Today's delay will not have any impact on the rendezvous and docking timeline, but it could stretch out the time needed for engineers to finish assessing the health of the heat shield.

The astronauts were awakened at 4:20 a.m. ET to begin their first full day in space, which included a post-launch inspection for any damage to the shuttle, and to check out equipment needed for upcoming spacewalks.

Two rendezvous rocket firings are planned to fine-tune the shuttle's approach to the International Space Station for a docking Sunday morning.

Space station flight controllers, meanwhile, are continuing to discuss a possible debris-avoidance maneuver to increase the distance between the lab complex and a piece of space junk expected to fly past Sunday morning.

If additional radar tracking indicates an avoidance maneuver is needed, it likely would be carried out remotely during crew sleep Saturday evening. A decision one way or the other is expected by 5 p.m.

The heat shield inspection, standard fare for post-Columbia shuttle crews, uses an instrumented 50-foot-long boom attached to the end of the ship's robot arm to scan the nose cap and wing leading edge panels to look for any signs of impact damage that might have occurred during the climb to space.

"Back in those first couple (post-Columbia) flights when they were doing this, this was considered a very difficult and unique robotics maneuver, so a lot of attention was spent on it," commander Ken Ham said in a NASA interview. "Since those flights, we've flown a bunch more. We've a lot more confidence in how this works and at the risk of sounding cavalier ... that task is now almost considered somewhat mundane."

Mundane, perhaps, but with today's glitch mundanity does not always go as planned.

Also on schedule today, crewmates Michael Good and Stephen Bowen will check out spacesuits and other equipment needed for upcoming station assembly spacewalks.

Later this afternoon, Reisman and Bowen will make sure the crew's rendezvous tools are set up for docking Sunday around 10:27 a.m.

A mission status briefing is planned for 2 p.m., followed by a post-Mission Management Team briefing at 4 p.m.