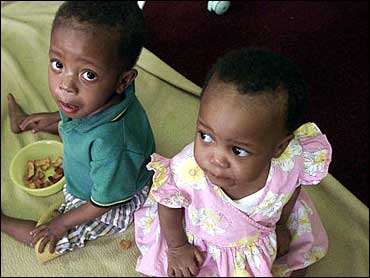 In trying to agree on how to spend the billions of dollars President Bush promised for a global fight against AIDS, Congress can't get past the basic questions like whether it's more important to advise people to abstain from sex or to give them condoms.

The House International Relations Committee, set to vote Wednesday on a five-year, $15 billion AIDS package that should win support from both parties, is at odds with the White House on where the money should go. The Senate was still searching for a consensus approach, and AIDS funding advocates were not optimistic for success.

In his State of the Union address to Congress in January, Mr. Bush asked for $15 billion over five years, including $10 billion in new money, to fight AIDS, particularly the epidemic in Africa. "Seldom has history offered a greater opportunity to do so much for so many," he said.

White House differences with Congress, however, have resulted in postponed votes in both the House International Relations Committee and its Senate counterpart in recent weeks.

The House, led by committee chairman Henry Hyde, R-Ill., is seeking $3 billion a year and would funnel up to $1 billion of that in the 2004 budget year to the Swiss-based, U.N.-backed Global Fund to Combat AIDS, Tuberculosis and Malaria.

The White House has questioned the efficiency of the fund, even though it recently picked Health and Human Services Secretary Tommy Thompson as its chairman, and wants to give it $200 million a year. Conservative groups contend the Global Fund gives money to the U.N. Population Fund, which is mistrusted by some conservatives because it supports groups that carry out or advise women about abortion. AIDS groups deny that any Global Fund money goes to the Population Fund.

Hyde, a leader of anti-abortion lawmakers, has avoided that controversy so far by not including language, appearing in other foreign aid bills, that restricts aid to health and family planning groups that promote abortion.

Conservative groups are not happy with that and also are intent on changing language in the bill dealing with condoms.

The bill endorses the "ABC" approach that has had some success in Uganda, which stresses abstinence, being faithful and, when appropriate, condoms. But Connie Mackey of the Family Research Council said it doesn't go far enough toward making abstinence a priority over condom distribution.

The Uganda experience, Mackey said, is proof of what works. "We're hoping the bill will better reflect that," she said.

Negotiators reportedly are considering language to make sure religious organizations that promote abstinence and oppose condom distribution will be eligible for AIDS funding.

The House bill also ensures closer monitoring of the Global Fund and recommends that 55 percent of the money go to treatment, 15 percent to hospice care and 20 percent to prevention, with the rest for other purposes.

In the Senate, Foreign Relations Committee Chairman Dick Lugar, R-Ind., also has tried to find a consensus that would satisfy the White House, the conservatives and the Democrats. "It's going to take a little longer," Lugar's spokesman, Andy Fisher, said.

"The worst possible outcome is to see it descend into partisan rancor," said Mark Isaac, vice president of the Elizabeth Glaser Pediatric AIDS Foundation. "It's a matter of such urgency that it is crucial the parties come together."

"The idea of a bipartisan bill seems to be losing ground on the Senate side," warned Paul Zeitz, executive director of the Global AIDS Alliance. The war in Iraq has distracted attention, he said, and the window of opportunity for moving the bill through Congress may be closing.

Even without a bill, Congress can still respond to the president's request for more global AIDS money later in the year when it passes spending bills for the coming budget year. That path, advocates said, would leave Congress without the blueprint it needs on the best way to deal with the epidemic.