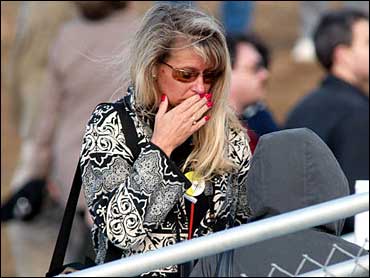 World leaders offered condolences Sunday for the loss of the space shuttle Columbia and its seven crew members, as thousands in India and Israel mourned the deaths of two of the astronauts who had become national heroes.

The Columbia disintegrated over the U.S. state of Texas Saturday minutes before it was to land, killing all seven crew members, including Israel's first astronaut and the first Indian-born woman in space.

"For us in India, the fact that one of them is an India-born woman adds a special poignancy to the tragedy," Prime Minister Atal Bihari Vajpayee said in his condolences to U.S. President George W. Bush.

In the Indian town of Karnal, the birthplace of crew member Kalpana Chawla, jubilation turned to sorrow. She emigrated to the United States in the 1980s and became an astronaut in 1994.

Teenagers and the elderly gathered around a shrine with a photograph of Chawla, draped in marigold garlands. In the picture, she was wearing a NASA uniform.

"Yesterday evening we came here to celebrate her arrival. But, when we heard this news we were really shocked," said 18-year-old Vivek Nagpal.

"It was a very great loss to our country," he said. "She proved that nothing is impossible."

Like Chawla, Israeli Ilan Ramon's role in the mission held special significance for his troubled country, where spirits were lifted when he blasted off last month on Columbia. Ramon, 48, was an air force colonel and the son of a Holocaust survivor.

Israeli teenagers who designed an experiment taken into space by Ramon gathered in stunned disbelief Saturday night to mourn their hero.

"It's like going on a trip and getting to the door of your house and falling just as you go in," said Adar Moritz, 17, who traveled to the U.S. state of Florida to watch the Columbia launch on Jan. 16. "It's very sad."

Jiang said he believed that mankind would continue to make further progress in space exploration despite the setback, Xinhua reported, a reflection of China's hopes to send its first astronauts into space this year.

Japanese Prime Minister Junichiro Koizumi also sent a message to Bush. "On behalf of the government and people of Japan, I pray for the crew members who accomplished their mission courageously for the progress of all mankind," he said.

The accident will immediately affect Japanese astronaut Soichi Noguchi, who was to fly on NASA's next shuttle mission, planned for March 1. U.S. officials have suspended all shuttle flights during the investigation of the Columbia accident.

Hong Kong Chief Executive Tung Chee-hwa said he was "deeply shocked and saddened to learn of the tragic loss," while Pakistan's Foreign Office said it sympathized "with the American president and people for the loss of the precious lives."

South Korean President Kim Dae-jung sent a letter to Mr. Bush, saying: "I pray for the souls of the victims and convey words of heartfelt consolation to you and the bereaved families."

French President Jacques Chirac expressed "the profound emotion and feeling of solidarity ... that all my compatriots are feeling." German Chancellor Gerhard Schroeder paid tribute to the "courageous men and women" of Columbia's crew.

In letters to Mr. Bush and Sharon, British Prime Minister Tony Blair said he wished to "express the government's sadness and offer his condolences after the death of the courageous astronauts," his office said.

Canadian Prime Minister Jean Chretien also praised the astronauts' bravery. "Each one was a hero. Their contribution to science and space exploration will never be forgotten," he said.

"The Afghan people are very sad for our brothers in the United States and we share their grief," said Sayed Fazel Akbar, a spokesman for Afghan President Hamid Karzai.

In a message to Mr. Bush and Sharon, European Commission President Romano Prodi said the work of the astronauts was "of benefit to all of humanity."

Despite its rocky relations with the United States, Cuba also expressed condolences and ordered its U.N. delegation to lower its flag to half-staff. "The Cuban people join the American people in their sorrow and grieve for the deaths of some of their sons and daughters," read a statement from the Cuban Foreign Ministry.

U.N. Secretary-General Kofi Annan deemed the accident a loss to all humankind "because the exploration of space knows no national boundaries."

Romanian President Ion Iliescu sent his sympathy, as did leaders from Saudi Arabia, Kuwait and Turkey.

In Spain, a condolence message from King Juan Carlos was offset by an editorial in the daily El Mundo newspaper which said, "What happened (Saturday) sends another shot of humility to a nation still not over the deadly blow of the Sept. 11 attacks."

Pope John Paul II received the news with great sadness and prayed for the astronauts during services, a Vatican official said.

"We mourn with you," Estonian President Arnold Ruutel said in his message.

But in China, some tempered grief with hope.

"Mankind will not give up the dream of space exploration," Chen Maozhang, a professor at China's University of Aeronautic and Astronautic Science and Technology, was quoted as saying by Xinhua.

"Facing the setbacks, mankind needs to find out the cause of the accident and make improvements," Chen said.

China is pushing its bid to become the third nation, after Russia and the United States, that is able to send its own astronauts into orbit.