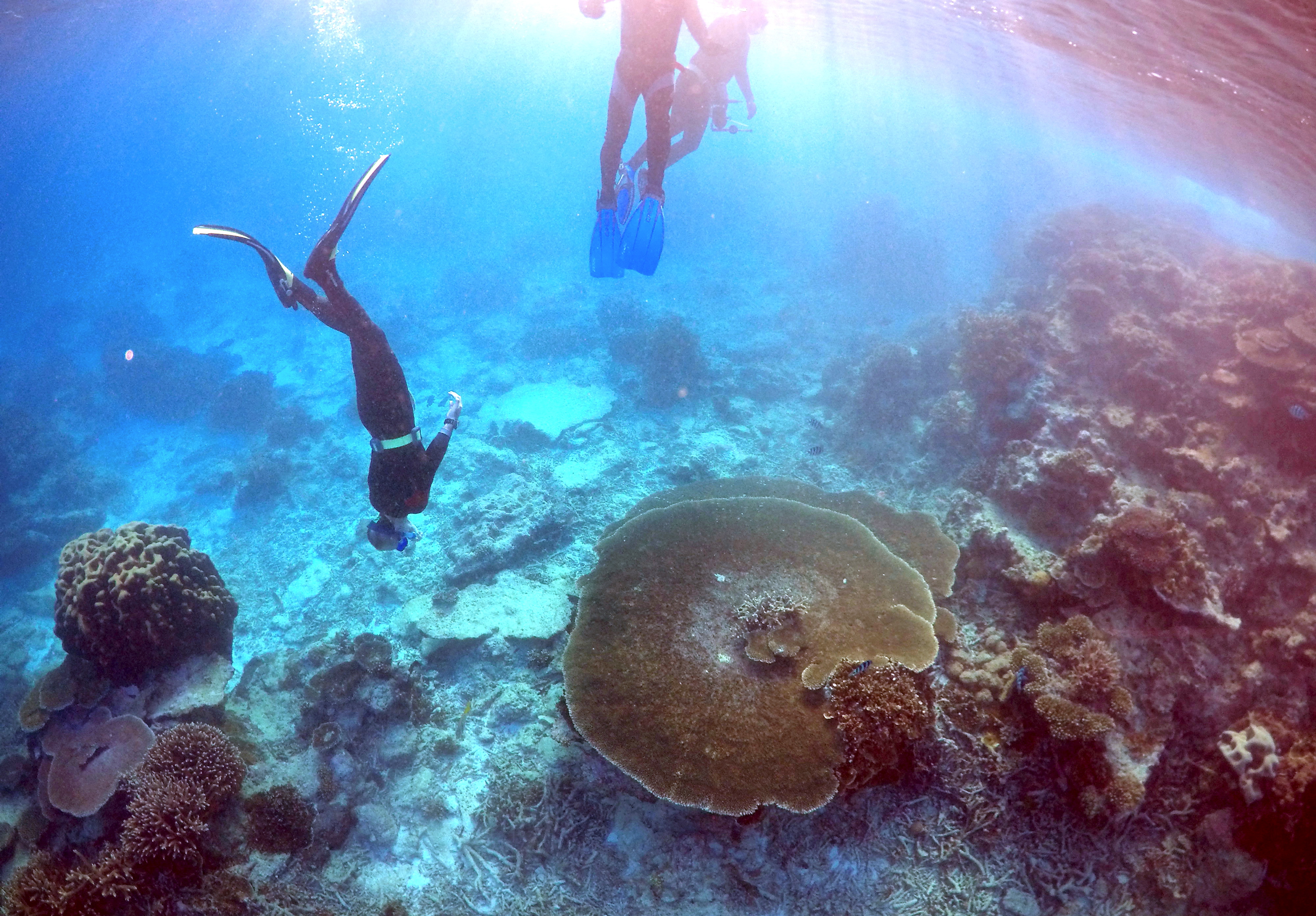 SYDNEY -- Mass bleaching has killed more than a third of the coral in the northern and central parts of Australia's Great Barrier Reef, though corals to the south have escaped with little damage, scientists said on Monday.

Researchers who conducted months of aerial and underwater surveys of the 2,300-kilometer (1,400-mile) reef off Australia's east coast found that around 35 percent of the coral in the northern and central sections of the reef are dead or dying, said Terry Hughes, director of the ARC Centre of Excellence for Coral Reef Studies at James Cook University in Queensland state. And some parts of the reef had lost more than half of the coral to bleaching.

The extent of the damage, which has occurred in just the past couple of months, has serious implications, Hughes said. Though bleached corals that haven't died can recover if the water temperature drops, older corals take longer to bounce back and likely won't have a chance to recover before the next bleaching event occurs, he said. Coral that has died is gone for good, which affects other creatures that rely on it for food and shelter.

"Is it surprising? Not anymore. Is it significant? Absolutely," said Mark Eakin, the coral reef watch coordinator for the U.S. National Oceanic and Atmospheric Administration. "We're talking about losing 35 percent of the population of coral in some of these reefs - that's huge."

The damage is part of a massive bleaching event that has been impacting reefs around the world for the past two years. Experts say the bleaching has been triggered by global warming and El Nino, a warming of parts of the Pacific Ocean that changes weather worldwide. Hot water puts stress on coral, causing it to turn white and become vulnerable to disease. Other reefs have suffered even more severely from the recent bleaching; Some Pacific islands, for example, have reported coral death rates of more than 80 percent, Eakin said.

This is the third and most extreme mass bleaching event in 18 years to strike the Great Barrier Reef. In each case, the areas that suffered the worst bleaching were the areas where the water was hottest for the longest period of time, Hughes said.

This time, the southern half of the reef was spared largely due to a lucky break that arrived in the form of a tropical cyclone. The remnants of the storm which had lashed the South Pacific brought cloud cover and heavy rains to the region, cooling the ocean enough to stop bleaching that had just begun in the south. About 95 percent of the coral in the southern portion of the reef has survived.

Storms have previously proven very helpful for heat-stressed reefs, Eakin said. In 2005, for instance, the quick succession of Hurricane Katrina and Hurricane Rita cooled the waters below as they passed over Florida, sparing the Florida Keys from a serious coral bleaching event affecting the Caribbean.

Experimental approaches to the bleaching dilemma have included attempts to lower water temperatures by using shades to cover corals, Eakin said. But such efforts require massive amounts of preparation and can only be done in small areas, Eakin said. Other solutions may lie in finding ways to minimize additional stressors to the already fragile reef.

"Anything you can do to reduce the level of injury and stress coming from other sources, the better the chance that the corals are going to survive," Eakin said. "Those reefs that have recovered after events like this are the ones that are the most protected, least visited and least disturbed."

Last year, the United Nations' heritage body expressed concern about the state of the Great Barrier Reef and urged Australia to boost its conservation efforts.

Following the release of the bleaching report on Monday, Australian politicians - who are in the midst of an election campaign - jumped on the issue, with the opposition Labor Party pledging to create a $500 million fund for better management and research of the reef. Environment Minister Greg Hunt, meanwhile, announced that if his party is re-elected, the government would invest $6 million to helping combat the crown-of-thorns starfish, which feast on coral.