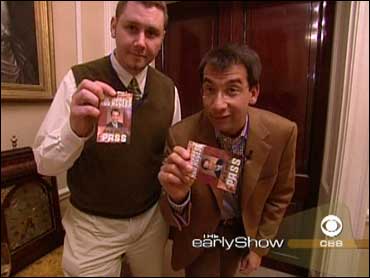 After e-mailing the The Early Show about his "All-Access" fantasy adventure, Boston's Stephen Blinn was picked from a crowd in Boston to go on an "All-Access Pass" getaway with Dave Price.

Blinn was promised that he would get to see the sights and sounds that few British people — let alone tourists — ever experience. We did not disappoint.

After being whisked away in Boston on Virgin Atlantic Airways on Friday, the first stop in London on Saturday was to see the changing of the
Queen's Life Guard.

People usually stand in line for hours just to get a glimpse of this ritual, but with an "All-Access Pass," Blinn and Price got a birds-eye view of the pomp and circumstance from the Major General's office.

A trip to London must include a visit to Portobello — world's largest antiques market where you can shop for just about anything.

After working up an appetite, nothing says London like a meal of fish and chips and a stop at a local pub for a pint of ale.

After lunch, it was time for a high-speed tour of the Thames aboard a speedy boat, marveling at all the landmarks along the way.

"I have never seen London this way," Blinn said while passing under the Tower Bridge. "It takes on a whole new dimension. It's amazing."

The next stop on the "All-Access Pass" tour was taking part in the "quintessentially English tradition" of high tea at Claridges Hotel with Lionel Richie. The superstar was in town promoting his new album, "Coming Home," which hits stores Sept. 12, 2006.

The whirlwind weekend wrapped up with a stop at the stage door of the Royal Albert Hall for the final night of the Proms — or "promenade concerts" — the culmination of the 8-week summer music season of daily orchestral classical music concerts.

For more information on visiting London and other great places in England on your own, check out VisitBritain.com.

What's your fantasy adventure?
Tell us and if you can be in one of the cities Dave is visiting across the country Fridays through Oct. 27, you could be whisked away on an "All-Access" weekend, too. On Friday, Sept. 15, join Dave in Chicago.

If you can't get to the cities Dave is visiting, you can win an amazing "All-Access Pass" weekend by playing at home. Each Tuesday through Oct. 31, we'll ask a question about Dave's past weekend's "All-Access" adventure. Every correct answer enters you for a chance for the ultimate "All-Access" weekend — a trip for two to Super Bowl XLI in South Florida which airs on CBS on Feb. 4, 2007.