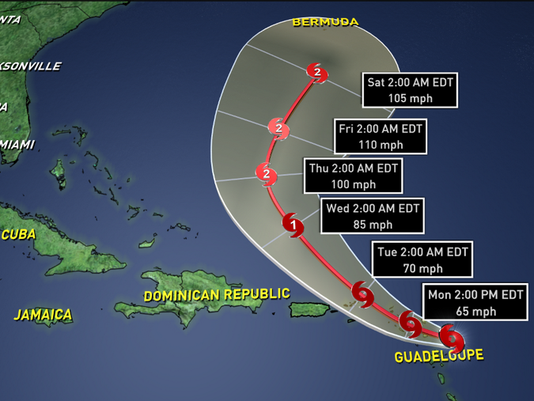 MIAMI - Forecasters say Hurricane Gonzalo has formed in the eastern Caribbean and its winds are buffeting the island of Antigua, downing trees, knocking out power and tearing roofs from homes.

The National Hurricane Center in Miami, Florida, said Monday afternoon that Gonzalo is packing sustained winds of 75 mph. Some strengthening is likely.

The storm gained strength as it passed through the Leeward Islands on a track toward the U.S. and British Virgin Islands and to the east of Puerto Rico, now as a hurricane.

For several hours, heavy rain and strong winds lashed Antigua, which bore the brunt of the storm as it cut through the Leeward Islands. Downed trees already blocked many island roads and people called radio stations to report that the storm had stripped all or part of the roofs from their homes.

Sherrod James, deputy director of the National Office of Disaster Services, said the agency has received reports of damaged homes but no injuries or deaths from the storm.

The government ordered schools and businesses to close amid an island-wide power outage and opened four emergency shelters.

"Based on recent updates, we are asking persons to stay within their homes and those persons who need to move from vulnerable areas to seek first to move with family and friends or if absolutely necessary to move to the shelters," Minister of Social Transformation Samantha Marshall said in a text message.

As of 5 p.m. EDT, the center of Gonzalo was about 20 miles southeast of St. Martin and 140 miles east-southeast of St. Thomas. It is moving toward the northwest at 12 mph.

Scott Stripling, a meteorologist tracking the storm from the U.S. National Hurricane Center in Miami, said the latest forecast puts it on track to take a northwesterly turn, passing over the Virgin Islands and near the Puerto Rican islands of Vieques and Culebra.

Over the weekend, Tropical Storm Fay knocked out power to thousands in Bermuda before moving out over open ocean.