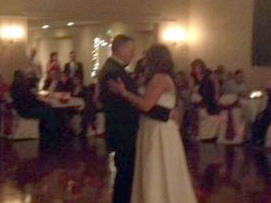 CHICAGO - A man married less than seven hours was killed along with a stranded motorist he stopped to help in the snow when they were struck by several vehicles, authorities say.

The man was on the way back from his wedding reception to a hotel when the accident happened.

William Riley Knight, 49, of Crown Point in northwestern Indiana, was driving with his new wife, Nikki, about 11:45 p.m. Saturday when they saw a woman who had slid off the road in the snow.

"He was on his way home from his wedding reception when he stopped to provide assistance to this female who was walking up the embankment after her car had slid off the road," Lake County Sheriff's Office Spokeswoman Patti Van Til told CBS station WBBM.

"He said, 'We've got to stop, it's late and they need help,'" Nikki Knight told the Chicago Sun-Times   on Sunday.

He pulled his truck into a nearby driveway and Nikki Knight waited inside while he went out to help Linda Darlington, 42, of Crown Point. They were standing by the side of the road when they were struck by one vehicle, and then two more, the Lake County sheriff's office said.

Nikki Knight, a registered nurse, said when she got to the wreck, neither Knight nor Darlington had pulses. They were pronounced dead at the scene early Sunday.

"I went from a being a newlywed to a widow in less than 48 hours - the highest high to the lowest low," Nikki Knight said. "It's a blur."

Police said all drivers involved in the crash remained at the scene. No charges had been filed as of Sunday afternoon.

Knight, who went by his middle name of Riley, had served in the U.S. Army Rangers before retiring in the mid-1990s, his ex-wife told WBBM.

He had two daughters, a stepson and stepdaughter.

“He was the type of person who was willing to put himself on the line and support you no matter what,” Nikki Knight told the Sun-Times.