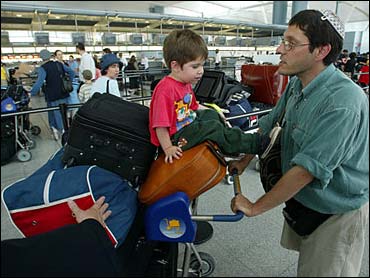 Tali Berman was born in America, but surrounded by her baby and belongings at Kennedy Airport, she said she was flying home - to Israel.

"We're Jewish, and it feels like home," said Berman, 27, who was "making aliyah" - making Israel her new home - with husband Joshua and their 15-month-old daughter, Anava.

Berman and her family joined about 330 Jews from the United States and Canada who flew to Tel Aviv on Tuesday. Another chartered jet of about 300 people is leaving later this month.

About 2,040 North American Jews moved to Israel last year, and the numbers are up more than 20 percent this year, according to the Jewish Agency, an Israeli quasi-governmental agency that helps the immigration process.

Some Jews feel compelled to show their support for the country as it faces heightened violence in its conflict with the Palestinians, according to agency officials.

"It's the feeling of the community that this time Israel is really needing them," said Michael Landsberg, executive director of the agency's North American aliyah movement.

He said others with bills to pay are taking advantage of loans of $7,000 to $18,000 offered by a privately funded organization called Nefesh B'Nefesh. The loans become grants if the immigrants remain in Israel for at least three years.

"I know that there are many Jews who would consider aliyah if they could escape from their loans and mortgages," Landsberg said.

Nefesh B'Nefesh, or Jewish Souls United, is sponsoring the moves of about 940 North American Jews this year, up from 519 last year, spokesman George Birnbaum said. About 300 are leaving on a chartered jet July 22, the rest in groups of 30 or so over the following six weeks.

"In terms of immigrants moving en masse," Birnbaum said, "there haven't been these numbers in 25 or 30 years."

Nevertheless, Israel's Central Bureau of Statistics said this year that worldwide immigration to Israel in 2002 had fallen to its lowest level in 13 years. About 33,000 people immigrated in 2002, about 10,000 fewer than in 2001.

As the travelers on Tuesday waited for their flight, many families danced to traditional Jewish melodies played by a band. Luggage carts were stacked high with belongings. Some immigrants wore signs reading, "I'm making aliyah."

Jewish Agency officials said about 30 percent of the immigrants who arrived this week will live in the occupied West Bank, with most of the others headed for large cities.

"Living in Israel for some period of time is the right thing for anyone who's Jewish to do," said Lauran Hazan, a software marketer from Toronto who is moving to Tel Aviv next month.

Hazan, 28, is also pursuing a master's degree in Middle Eastern history at Tel Aviv University. "This isn't just about politics," she said. "I mean, it's my life."

Hazan and Berman said they weren't fearful of increased violence in the region, although Hazan said she worried about finding work in an economy battered by the conflict.

"Now, as things are becoming more intense, it's an important time to make a claim that the Jewish state has a right to exist," said Berman, who plans to work with autistic children and reunite with family members already there.

Along with the jump in North American immigrants to Israel, Jewish Agency officials say the number of groups that help with the process has grown in recent years.

Melissa and Yishai Fleisher founded such an organization, called Kumah. The Fleishers, who were at the airport for Tuesday's sendoff, said they will move to Israel in October.