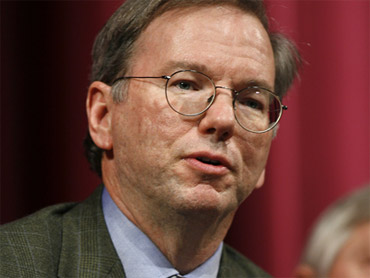 Google CEO Eric Schmidt has resigned from Apple's board of directors as the Internet search leader increasingly develops products that compete with Apple's core businesses, including the popular iPhone.

Shares of both companies rose in early trading.

Apple Inc. CEO Steve Jobs said Schmidt would have had to recuse himself from large portions of the company's board meetings to avoid potential conflicts of interest.

"Therefore, we have mutually decided that now is the right time for Eric to resign his position on Apple's Board," Jobs said in a statement.

Schmidt had been on Apple's board since August 2006. His resignation comes as the Federal Trade Commission is looking into whether Google's common ties with Apple might discourage competition.

Just a few months ago, Schmidt expressed confidence that a government inquiry into his role on Apple's board won't find any evidence that the ties between the two companies throttle competition in mobile phones and elsewhere.

He said in May, in a media session ahead of Google's annual shareholder meeting, that he hasn't considered stepping down as an Apple director because he doesn't view the company as a "primary competitor."

And Google is developing a free operating system based on its Web browser, Chrome, a potential rival to Apple's Mac systems.

Google has recently turned its 2007 acquisition of GrandCentral into Google Voice, which assigns a unique phone number to each user and lets the user direct calls to that number to any other phone line.

Relationships between the two companies haven't always been smooth. On Friday, the Federal Communications Commission sent letters to Apple and Google - as well as Apple's iPhone partner in the United States, AT&T Inc. - seeking more information on Apple's rejection of Google Voice's application for the iPhone.

The popularity of Apple's iPhone is soaring even amid the recession. The company said in July it sold more than 5.2 million iPhones in the U.S. during the April-June quarter, more than seven times what it sold in the same period a year earlier.

Google's Android operating system currently runs on the T-Mobile G1, which went on sale last year. The second "Google phone" from T-Mobile goes on sale this week. Google's goal is to make Android the operating system for phones across the industry, so it gives away the software for free for any phone maker to incorporate.