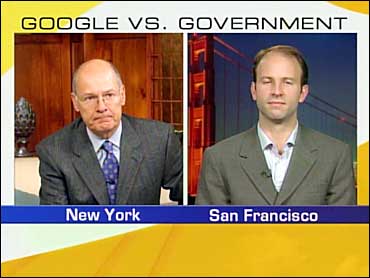 Google makes headlines for lots of reasons, but its latest legal battle is making waves from Washington to Wall Street and with Internet users everywhere.

The company is refusing to cooperate with the Bush administration's demand to see what millions of Google customers have been looking up online.

reports on
The Early Show that the government's demand is focusing attention on just how much data Google collects. With every search, Google can add to a user's profile.

The government's subpoena demands the addresses for a million random Web sites plus a week's worth of searches on Google. It says the aim is to protect children from finding pornography on the internet.

The government argues that its demand is not a privacy issue because it is not asking for the identity of the people doing the searches, but rather for records of a million random Web searches during a one week period.

To many observers, that is not completely reassuring.

"This is what's known as the slippery slope argument," John Battelle, a technology writer, told Blackstone. "This time they're not asking for personally identifying information. But this is just the first time that we've heard of."

Google's vast trove of personal information is used to create the focused advertising that has made the company so phenomenally successful.

From its initial offering price of $85 last August, Google's shares soared to a high of over $475. They dropped sharply to under $400 last week but began this week with a strong recovery.

Still, the government's demand for information could have an impact by making consumers skittish about using a service that gathers so much information about them.

"I think that's the one thing that is potentially harmful to not only Google but to the Internet, in general," says Battelle.

Another threat Google needs to consider is how this lawsuit could expose some of its trade secrets, according to Kevin Delaney of the Wall Street Journal.

Appearing with co-anchor Harry Smith on The Early Show, Delaney said, "They're afraid that if they hand over this data … people would be able to understand a little bit more what's behind the curtain."

As for the privacy issue, it is clearly a hot button issue on the Internet and elsewhere.

"There is no personally identifiable information that the government has requested along with this data," Delaney told Smith. "But it definitely is coming at a time when there is a lot of concern about government surveillance."

Delaney also believes it might, ultimately, be good for users to pay attention to the amount of information Google collects.

"They may use it for different purposes," he told Smith. "And it's probably not a bad reminder that people realize that."