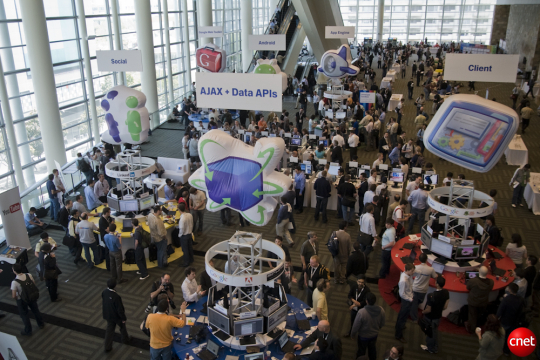 How much bigger can Google's world get?

As Google prepares for its third major developer conference, it's getting ready to pitch its vision for the future of computing to 5,000 developers and media at San Francisco's Moscone center. When I/O kicks off on Wednesday, don't expect Google CEO Eric Schmidt to break out into a passionate "Developers!" chant like his counterpart at Microsoft, CEO Steve Ballmer, did all those many years ago.

However, this is clearly one area in which Google and Microsoft--bitter rivals otherwise--can agree: developer support is crucial to the growth of technology platforms. Google has scheduled press briefings for its enterprise, Wave, Chrome, and Android technologies, giving us a pretty good idea of what topics it intends to highlight during the show.

One major thing has changed between last year's show and this year's, in that Android is now a mainstream operating system that is increasingly butting heads with Apple's iPhone for mindshare among consumers and developers.