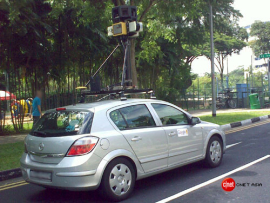 Google admitted in a blog post Friday that it has been snooping on Wi-Fi users as its Street View cars have been riding around neighborhoods throughout the world collecting data for its mapping service.

In a blog post, the company said it has parked its Street View cars and stopped collecting data after it realized that it has been inadvertently collecting data about people's online activities from unsecured Wi-Fi networks over the past four years. The disclosure could not come at a worse time for Google, following strident criticism over its Google Buzz launch from privacy experts and a growing unease among consumers regarding the amount of data it collects.

Google had apparently told German authorities last month that it had been collecting "publicly broadcast SSID information (the Wi-Fi network name) and MAC addresses (the unique number given to a device like a Wi-Fi router) using Street View cars." But it said that it did not collect payload data or information sent over the network.

"It's now clear that we have been mistakenly collecting samples of payload data from open (i.e. non-password-protected) Wi-Fi networks, even though we never used that data in any Google products," Alan Eustace, senior vice president for engineering and research, wrote in the blog post.