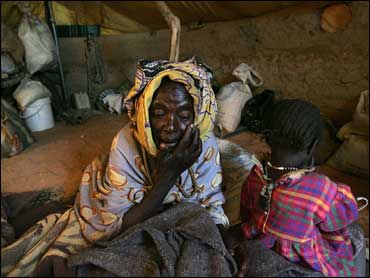 Google is using its popular online mapping service to call attention to atrocities in the Darfur region of Sudan.

In a project with the United States Holocaust Memorial Museum, inaugurated Tuesday, the Internet search company has updated its Google Earth service with high resolution satellite images of the region to document destroyed villages, displaced people and refugee camps.

Google Earth allows those who have downloaded its free software to focus on satellite images and maps of most of the world. When users scan over the Darfur region, where the United Nations estimates that more than 200,000 people have been killed and 2.5 million displaced in four years of carnage, Google Inc. hopes to attract their gaze with icons.

The icons represent destroyed villages with flames and refugee camps with tents. When users zoom in to a level of magnification that keeps most of Darfur on a computer screen, the icons seem to indicate that much of the region is on fire. Clicking on flame icons will open windows with the village's name and statistics on the extent of destruction.

Google enhanced the resolution for certain areas of the region so that users can zoom in to see the burnt remnants of houses. Google says it will periodically update the images.

The online maps of the region also include an icon that links to a presentation by the Holocaust museum on the crisis in the region with photos, video, historical background and testimony on atrocities.

Sara Bloomfield, the museum's director, said museum staff members had approached Google about the project as they sought ways to highlight what they believe is genocide to many people who remain unaware. In Google Earth, which the company says has been downloaded by 200 million people worldwide, they found an ideal medium.

Visit the Holocaust Museum's Web page on the project.

"This is like the world's biggest bulletin board," Bloomfield said.

Sudanese officials, including President Omar al-Bashir, have denied that widespread atrocities have occurred in Darfur. But The Hague-based International Criminal Court has accused officials and militias of orchestrating massacres, mass rapes and the forcible transfer of thousands of civilians from their homes. The United States characterizes the massacres as genocide; other countries and international organizations do not.

Daowd Salih, a native of Darfur and a former officer for the German Red Cross, who spoke Tuesday at a presentation by Google and the museum on the new project, said he hoped that Google Earth would help document atrocities for millions of users.

"We need President Bashir and other perpetrators to know they are being watched," he said.