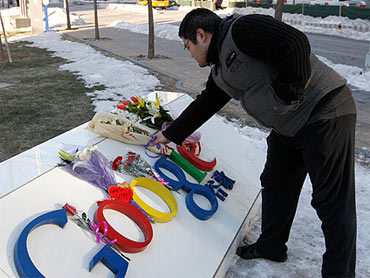 Outside one of the nondescript glass-and-steel buildings tucked inside a quiet high-tech park in northwestern Beijing, an unusual farewell party is unfolding under intense media scrutiny.

Strangers from different walks of life have gathered throughout the day to pay tribute to the building's corporate tenant, leaving bouquets of flowers, cards with handwritten messages and even bottles of Chinese hard liquor by a familiar logo sign. As the night falls, well-wishers light up candles.

The reluctant guest of honor is none other than Google, the U.S. search engine giant that has announced its impending departure from the mainland Chinese market, citing China-originated hacking into its e-mail service and increasing censorship on search results imposed by the government.

Although Google claims negotiations with the Chinese authorities continue, many industry analysts and ordinary users agree that, by stating its grievances so publicly, Google has left little wiggle room to Beijing, which loathes to appear weak under foreign pressure. They view it almost a fait accompli that the Google will fold its Chinese-language services and shut down its operations on the mainland.

"I want to show my respect for Google," says Jerry Chou, 35, one of the people who laid flowers in front of Google's China headquarters on Wednesday. The manager of a Beijing Internet firm tells CBS News that he especially salutes Google for "not sacrificing the interests of its customers in exchange for its own commercial interests."

More than 600 miles to the south, a foreign bank employee who wants to be known only as Lala, made it to Google's office in downtown Shanghai during her lunch break. She brought roses and lilies as well as a card in support of the company's stance, and exchanged a friendly chat with the local staff.

"I also want to encourage the employees," Lala, 26, explains to CBS News over the phone. Like many other Google fans in China, she sees a potential silver lining in their favorite Internet company's retreat from the world's most populous nation.

"It's not Facebook or YouTube," she says, naming two popular Web sites blocked by China's extensive Internet filtering and censorship system known as the Great Firewall. "It's Google – people will notice the impact of its loss on their daily lives."

"It may finally jolt them into action to change the situation," she adds.

Already, the outpouring of sympathy and support for Google in Chinese cyberspace has propelled the topic to one of the most tweeted online, even though Twitter itself has been off-limits in China since last July. The Chinese Twitterers have investigated, opined and joked, leaving memorable lines like "it's not Google withdrawing from China, it's China withdrawing from the world" (@cxzj) and "ten years of surfing online has turned this Chinese from an optimist to a pessimist" (@Fenng).

Despite remaining a small minority amongst the country's 300-million-strong Internet users, a growing number of young, tech-savvy Chinese now use proxy software to circumvent the Great Firewall – something many more are expected to do if Beijing decides to block Google.

Experts say the fate of Google in China may even provide a deeper insight into who is running the country.

"If Google.com is blocked, that's a sign of how furious the government would be to be put on the spotlight like this," Duncan Clark, chairman of Beijing-based BDA consultancy, tells CBS News. "It's also a sign that we increasingly see nationalistic, national security style politicians controlling China, instead of the world trade, engagement types that we became used to in the early 2000s."

So far the Chinese government has kept largely silent on the subject, with the state-run Xinhua news agency quoting one official as saying the authorities were seeking more information on Google's statement. Chinese web portals have been ordered to downplay the news and close all related discussion forums.

Twitter, however, is abuzz with talk of more admirers bringing flowers to Google offices across China in the coming days to display their solidarity with the company.

"It's still cold outside here in Beijing," Clark observes. "But it's certainly a very hot season right now online in China."