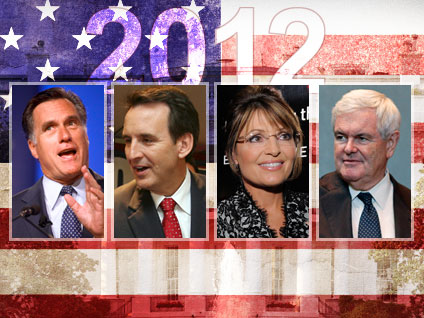 Sure it's too early to be talking about 2012, but for those who are moving seamlessly from the elections last week to the elections in 2012, here's some fresh intelligence on the positioning in Iowa leading up to the all-important caucuses two years hence:

Since President Obama is all but certain to run for re-election, the fun will be on the Republican side. And right now, the only GOP presidential hopeful with a paid staffer on the ground in Iowa is retiring Minnesota Gov. Tim Pawlenty. You don't pay people if you are not running, so even though Pawlenty has made no official moves, my Republican sources tell me to expect some signal from him mid-winter. Pawlenty is what passes for a moderate Republican these days and he could find himself to the left of a number of other candidates who seem to be making all the right moves to jump into the race.

Former Speaker Newt Gingrich. He'll be visiting three Iowa cities next week on a book tour and has for months been in and out of the state more often than a freight train of cattle. State Republican officials say Gingrich is very popular with the party's base of social and Christian conservatives, but also claims considerable support from the business community as well. At some past events, Gingrich has been urged to run for the top job by people who see him as the best man to take on Mr. Obama in a debate. Whatever the Washington political elite may say about Gingrich, he is popular in Iowa and party pros in the Hawkeye state now fully expect him to run. "He's taking all the right steps in preparation of setting up a statewide organization," one official said of Gingrich.

Former Massachusetts Gov. Mitt Romney also made some appearances in Iowa during the run-up to the mid-terms and has come to the state to hawk a book. There is no question that he has a devoted following and could generate an organization quickly if need be. But sources in Iowa say Romney has "not shown much leg" with respect to the next election. As the architect of a Massachusetts health care plan that bears some resemblance to what the Republicans call "Obamacare," Romney may be a harder sell this time around.

Former Pennsylvania Sen. Rick Santorum has been active in the state, stumping for candidates and apparently trying to gather political chits to cash in two years from now.

To the north lies South Dakota, home of Sen. John Thune. Thune was re-elected without opposition last Tuesday - a neat trick in this polarized climate. While he has made no overt moves toward a race, sources in Iowa would not be surprised if Thune jumps in.

That brings us to Indiana Gov. Mitch Daniels. Republicans around the country like to talk up the guy. He seems to have Indiana's budget in order and he's popular among Hoosiers. But Indiana's unemployment rate is 10 percent - not a great selling point. Still, there is definitely a buzz about Daniels in Iowa and he would surprise no one if he too joins the fray.

Fellow Hoosier, Rep. Mike Pence, is on everyone's radar in Iowa too. My sources tell me he would be particularly strong among evangelicals in Iowa. Many of them would gravitate toward Pence if former Arkansas Gov. Mike Huckabee decides against running again. If Huckabee does run, Pence will likely lack enough of a base to make the race.

Mississippi Gov. Haley Barbour has stumped for Iowa Republicans this year and is considered the kind of candidate at home in bib overalls or business suits. Sources in Iowa say Barbour speaks a language Republicans in the state understand. "His style could work well here," said one state party official.

New Jersey Gov. Chris Christie helped GOP candidates in Iowa during the mid-terms. He says he is not running for president, but others have said the same thing and have wound up in the ring anyway. We'll see.

And then there is Sarah Palin. She visited the state Sept. 17 and gave a big speech at the Reagan Day dinner in Des Moines that got all the tongues wagging about her future plans. But the Alaska governor met with no party leaders or potential bankrollers on that visit and left many thinking she is running for GOP cheerleader at most. She is very popular in Iowa - among a certain kind of Republican. Her plans remain a mystery to most.

Well there it is - a preliminary list of Republicans with an ear to the ground and an eye on the prize in 2012. But with President Obama suddenly looking a whole lot more vulnerable, it's a list that will probably grow longer.

Dean Reynolds is a CBS News correspondent based in Chicago. You can read more of his posts in Hotsheet here.