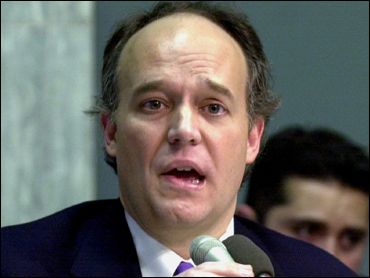 Within hours of Illinois Sen. Peter Fitzgerald's surprise announcement that he will not seek re-election, top Illinois Republicans were courting former two-term Gov. Jim Edgar to become the party's standard bearer in 2004.

Fitzgerald was widely regarded as the GOP's weakest incumbent. His exit puts the political spotlight on the Illinois Senate race and strengthens the GOP's chances of retaining control of the closely divided Senate, especially if Edgar gets into the race.

Edgar, a moderate who has twice rejected party appeals to run for Senate and retired as a popular incumbent in 1999, said the race was wide open and he was not ready to enter it.

"I don't want anybody to think I am doing this at this point. What I have done, at the request of party leaders, is said I would not say no and I would listen," said Edgar, who splits his time as a consultant and a fellow at the Institute for Government and Public Affairs at the University of Illinois in Champaign-Urbana.

Former Illinois Attorney General Jim Ryan and Illinois Treasurer Judy Baar Topinka, who heads the state GOP, were not ruling out the possibility that they could become candidates.

But many party strategists immediately suggested Edgar was the best antidote for a party weakened by demographic shifts and a crippling corruption scandal that plagued ex-Gov. George Ryan, Edgar's Republican successor.

"We had some real extensive comments about his possible election, and I said I think he would be an excellent candidate and one that would carry our banner high and would do well," said Illinois Senate Minority Leader Frank Watson, of Greenville, who talked with Edgar Tuesday. "He didn't say, 'No.'"

Fitzgerald, who poured millions of his own banking fortune into a narrow 1998 victory against Democrat Carol Moseley Braun — the nation's first black woman senator — announced Tuesday he would not seek a second six-year term. Fitzgerald faced a tough race in Illinois, where voters backed Democrat Al Gore over Republican George W. Bush for president in 2000 and swept Democrats into all but one statewide office last year while most of the country voted Republican.

"It's not lost on me that this state I know so well has become increasingly and overwhelmingly Democratic," Fitzgerald said.

The Washington Post reported that Fitzgerald also appeared to have been swayed by poor poll numbers and the prospect of a primary challenge.

The newspaper quoted Democratic strategist David Axelrod as saying, "He was just roadkill in the eyes of many politicians."

Fitzgerald's decision leaves Republicans with an open seat in a state key both for their hopes of keeping their 51-48 edge in the U.S. Senate and re-electing President Bush.

Sen. George Allen, R-Va., chairman of the National Republican Senatorial Committee, said he looked forward to working with GOP leaders such as Topinka and U.S. House Speaker Dennis Hastert of Illinois to find the best candidate.