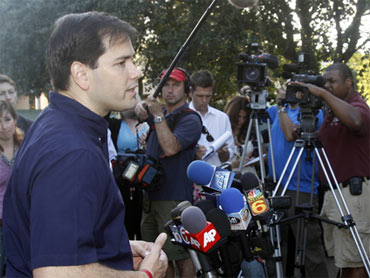 Republicans scored impressive gains, taking Senate seats from Democrats in Pennsylvania, Wisconsin, Arkansas, North Dakota and Indiana. They even won the seat in Illinois that had been held by President Barack Obama before his election in 2008.

The net gain of 10 they needed for control of the chamber, however, eluded them.

With Republicans taking over the House, President Barack Obama will need a Democratic-run Senate to champion his legislative agenda.

Opposition Republicans took four seats from Democrats in early returns for the U.S. Senate as they aimed to cut deeply into the Democrats' majority, even if they fall short of winning control, according to CBS projections.

According to a CBS News projection, Indiana voters gave Republicans their first Senate pickup of the election, sending Dan Coats back to the chamber after a 12-year absence. Coats, who spent a decade in the Senate before stepping down in 1998, defeated Democratic Rep. Brad Ellsworth.

Coats was U.S. ambassador to Germany from 2001 to 2005. He won the seat being vacated by retiring Democrat Evan Bayh.

In California, Democrat Barbara Boxer has won her fourth term in the U.S. Senate, dashing Republican hopes of removing the liberal icon with a strong challenge from former Hewlett-Packard Co. CEO Carly Fiorina.

Boxer's re-election Tuesday was not easy. She faced a multimillionaire candidate and a wave of attack ads funded by out-of-state business and conservative groups.

And West Virginia Gov. Joe Manchin held off millionaire Republican John Raese to keep a Democrat in the seat held for half a century by the late Robert C. Byrd.

In Arkansas, meanwhile, Republican John Boozman defeated Democratic incumbent Blanche Lincoln, CBS News projects, becoming only the second Republican from that state to serve in the Senate since the 1800s.

Lincoln, who supported Obama's health care reform bill, had been considered one of the most vulnerable Democratic incumbents seeking re-election this year.

In North Dakota, Gov. John Hoeven is projected to win the Senate race - making him the first Republican from the state to hold that office in a quarter-century. Hoeven easily outpolled poorly funded Democrat Tracy Potter to replace retiring Democrat Byron Dorgan.

Rand Paul of Kentucky and Marco Rubio of Florida rocked the Republican establishment last spring by routing leadership favorites in party primaries. Then they beat back Democrats' efforts to paint them as too extreme. Rubio is the son of Cuban immigrants.

In Utah, Mike Lee is projected to best Democrat San Granato to win the seat held by Republican Sen. Bob Bennett for 18 years.

However, another well-publicized tea party darling, Christine O'Donnell of Delaware, lost to Democrat Chris Coons, according to CBS News. She also won a stunning primary victory, but she failed to extend her popularity to the broader November electorate. Her loss to Coons is seen by the GOP as surrendering a Senate seat that could have gone Mike Castle, the Republican she defeated in the primary.

In Ohio, Rob Portman won the Senate race, according to CBS News, keeping a Republican in the seat that Sen. George Voinovich is vacating. Portman spent 12 years in the U.S. House starting in 1993. He later was budget director and then U.S. trade representative under President George W. Bush.

In the race to succeed retiring Democratic Senator Chris Dodd, Connecticut Attorney General Richard Blumenthal, a Democrat, easily defeated Republican former wrestling executive Linda McMahon, according to CBS projections, despite being outspent by McMahon by 7-1. Although this is the year of the "outsider", it was Blumenthal's years of experience that probably saved him from the attacks by the McMahon campaign. Moreover, McMahon's lack of political experience contributed to her failure to overtake Blumenthal after closing in on him after trailing by a wide margin early in the campaign.

Both the Pennsylvania and Illinois elections were close, but won by Republicans Pat Toomey and Mark Kirk, respectively.