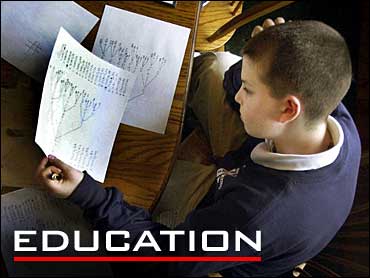 House Democrats lost a bid Wednesday to force the federal government to pick up more of the cost of educating children with special needs.

Democrats want the federal government to cover 40 percent of special education costs, the amount Congress promised when it approved the Individuals with Disabilities Education law more than 25 years ago. But Republican leadership ruled out amendments to a renewal of the special education law that would have phased in mandatory funding over six to seven years.

"There will be no debate in the United States House of Representatives on the most critical issue facing special education today," said Rep. James McGovern, D-Mass.

The money issue is significant because states and school districts must pay for whatever expenses the Congress doesn't cover. That amounts to billions of dollars that school leaders say they need for teacher training and salaries, books, equipment and other expenses.

Federal spending on special education, which stood between $1 billion and $2 billion throughout the 1980s and early 1990s, has increased to $8.9 billion in recent years. The House plan would increase the federal commitment from 18 percent to 40 percent over seven years at the discretion of Congress.

Republicans said mandating yearly increases would reduce oversight of special education and limit lawmakers' ability to respond to other needs.

"I'm convinced that we are doing the right thing," said Rep. Mike Castle, R-Del. "The bottom line is, the commitment is there."

Roughly 6.3 million children with physical or emotional disabilities receive special education. The law promising fair education for all, the Individuals with Disabilities Education Act, is up for reauthorization.

The appropriate discipline for misbehaving disabled students was expected to be a key area of dispute throughout House debate Wednesday. Another main sticking point is whether Congress should allow public money to be spent on private schooling.

The House bill promises earlier intervention for students with learning troubles and better evaluation of whether students, particularly minorities, are mislabeled as disabled.

Advocates for the disabled say the bill's benefits are outweighed by measures they believe will erode students' civil rights.

The bill would free schools from having to determine whether unruly behavior is linked to a disability as officials consider discipline. Special-education students could be suspended or expelled for a range of violations, not just ones involving weapons or drugs.

The change could lead to students getting yanked from class for minor infractions that are based on behavior they cannot control, several advocacy group leaders said Tuesday.

"This is very frightening, to parents and to children," said Ricki Sabia, associate public policy director for the National Down Syndrome Society.

GOP lawmakers, however, said creating one discipline system would improve safety and fairness. Schools would be required to consider all circumstances of a student's case, said Alexa Marrero, spokeswoman for the House Education and the Workforce Committee.

"Outlandish assertions that a child would be expelled for an involuntary action caused by a disability have no basis in reality," Marrero said.