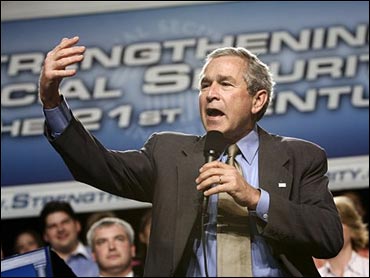 House Republicans announced plans Friday to draft Social Security legislation by June as President Bush warned Democratic critics not to "play politics as usual" with his call for sweeping program changes, including curtailment of some benefits.

"It will be a retirement bill," Thomas said, indicating it would also include steps to encourage private retirement savings. He also signaled that the legislation could include provisions to ease the cost of long term or chronic health care for the elderly.

But the president wasn't happy with many of Friday's headlines saying he planned to cut benefits for more wealthy beneficiaries. He said, instead, the rate at which their benefits grow would be lower.

CBS News Correspondent Anthony Mason reports that, judging from President Bush's speech, the bottom line is, the more money one makes, the more their expected benefits are cut. A worker retiring in 2055, now making an average wage, about $36,000, would see benefits cut 20 percent. If you earned $59,000, you'd see a 30 percent cut in benefits.

Thomas talked with reporters in the Capitol as Mr. Bush made his first public appearance since prodding lawmakers to consider reducing the benefits guaranteed to future middle and upper income retirees as part of a plan to assure the solvency of the Depression-era program.

"I have a duty to put ideas on the table, and I'm putting them on the table," the president said in suburban Falls Church. Va.

The outing was a follow-up to a prime-time news conference on Thursday, and he told his audience that "those who block meaningful reform are going to be held to account in the polls."

The president wants Congress to enact legislation that gives younger workers the ability to create voluntary personal accounts as well as place Social Security on a sound financial footing.

At his news conference, Mr. Bush said he envisioned a plan under which all future retirees could "count on a benefit equal to or higher than today's seniors."

"If you work hard and pay into Social Security your entire life, you will not retire into poverty," Mr. Bush promised.

Republicans officials had said in advance of the news conference that the president would prod lawmakers to embrace a plan that would curtail benefits for middle and upper income retirees of the future, but the president did not mention that part of his plan.

Near the end of a 60-day campaign for Social Security overhaul, Mr. Bush also renewed his call for Congress to pass Social Security legislation that allows younger workers to create private investment accounts with a portion of their payroll taxes. But as CBS News White House Correspondent John Roberts reports, despite the publicity blitz - polls show support for his Social Security plan slipping.

They reiterated their opposition to Mr. Bush's desire to let younger workers divert some of their Social Security taxes into personal retirement accounts.

"All the president did was confirm that he will pay for his risky privatization scheme by cutting the benefits of middle-class seniors," Pelosi and Reid said.

The president addressed an array of topics in the White House conference:

Gas Prices
The President pledged his effort to address

rising energy costs
. "There will be no price gouging at gas pumps in America," he said. The House has approved energy legislation, and a companion measure is awaiting action in the Senate. Bush said he wanted a bill on his desk by summer.

Iraq
Mr. Bush said he is pressing Iraq's incoming prime minister, Ibrahim al-Jaafari, to refrain from tinkering with the structure of the Iraqi security force that the U.S. military is creating and training. Bush called that possibility "one of the real dangers" as Iraq transitions to an independent democracy. "Keep stability, don't disrupt the training that has gone on," Bush said he has told al-Jaafari. "Don't politicize your military, in other words. Have them there to help secure the people."

Energy Proposal
CBS News Correspondent John Roberts asked Mr. Bush if his proposed energy plan would alleviate high gas prices. "It would have 10 years ago," Mr. Bush said, explaining that gas prices are due to U.S. dependence on foreign oil. "And now we find ourselves in the fix we're in." President Bush said the best way to affect U.S. gasoline prices is to encourage oil-rich nations to put more crude oil on the market, which is exactly what he was doing when meeting with Saudi crown prince Abdullah last week.

Judiciary Nominations
Mr. Bush urged the Senate to take "up or down" votes on his controversial nominees to the appeals courts. Democrats filibustered 10 of his first-term appeals court nominees, blocking confirmation votes on them. Bush has renominated seven of the 10, and Democrats have threatened to attempt to block them once more.

Faith
Faith is a personal issue, Mr. Bush said. Although it plays an "important" role in his life individually, he doesn't think it plays a part in how Congress receives his judicial nominations. Multiple questions by reporters speculated about the possible faith/justice relationship.

Washington Atmosphere
Mr. Bush says he's been disappointed with the political atmosphere in Washington. He says there's a lot of politics -- that you can't cooperate with "so and so" because they make their party look good. Even so, Bush says in the end his administration will get a lot done.

Russia's Putin
Russian President Vladimir Putin's decision to sell anti-aircraft missiles to Syria came under fire. "We didn't appreciate that," he said, "but we made ourselves clear." The two men are scheduled to meet in Moscow early next month.

North Korea
Mr. Bush called North Korea's Kim Jong Il a tyrant when asked about multi-lateral talks with the country. "I felt the bilateral approach didn't work. I thought a better approach would be to include people in the neighborhood," Mr. Bush said, meaning other countries, "especially China."