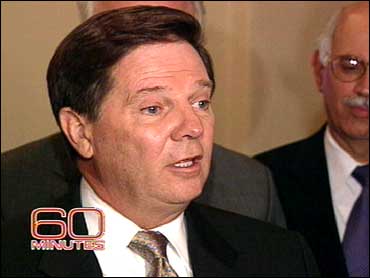 Venting anger over attacks against DeLay and other targets, some members of the GOP rank and file criticized Democrats in unusually sharp terms. One, Rep. Bob Ney of Ohio, was quoted by fellow Republicans at a closed-door meeting as calling the head of the House Democratic campaign committee a snake.

Ney disputed that. "I said he was a sneak," he said, referring to Rep. Rahm Emanuel, D-Ill.

"A snake, a sneak, sounds like Mr. Ney is in a snit," countered Bill Burton, Emanuel's spokesman.

With lawmakers back from a two-week break, Rep. Roy Blunt of Missouri, the GOP whip, told reporters, "I don't see any wavering of the support for the leader. I think a lot of members think he's taking arrows for all of us," he added.

At a news conference, other Republicans said Democratic attacks were an attempt to win control of the House in 2006.

Although Republicans on the Hill maintain the facade of unwavering support for their congressional leader, CBS News Correspondent Gloria Borger reports whispers in the halls of Congress make evident the support is not universal, and might not run deep.

Republicans are concerned about the potential damage to DeLay from the disclosures so far and fear that more may be forthcoming.

DeLay was hit by two new stories Wednesday. The Washington Post reported that he traveled to Russia in 1997 on a trip paid for by business interests. And The New York Times reported that his wife and daughter had been paid more than $500,000 since 2001 by his political action and campaign committees.

DeLay defended the payments as something that other lawmakers have done and said he took the trip believing it had been paid for by a nonprofit organization.

"What's going on here is a concerted effort to twist and, to twist the truth to make it look seedy and it's just not true," he told CNN.

Republicans picked up on that theme, charging that Democrats had decided to make DeLay their all-purpose target for attacks designed to end 12 years of Republican rule in the House.

"Nancy has two years to get the majority, she knows this is her only shot," said Rep. Jerry Lewis, R-Calif., speaking of Democratic leader Nancy Pelosi.

In a closed-door meeting of the rank and file, some Republicans were considerably more critical of Democrats.

Rep. J.D. Hayworth described their overall tactics as "thugorama," according to several lawmakers and aides who declined to be identified by name. His office had no immediate comment.

For their part, Democrats leveled a new charge, that the ethical controversy surrounding DeLay was distracting from congressional efforts to tackle pressing problems.

"When politicians, the Republican majority, decides it is above the law, the American people are now seeing that they have a price to pay — at the pump, for their pharmaceuticals, and in the absence of initiatives that would help grow our economy," said Pelosi.

She said Republicans had effectively shut down the ethics committee to prevent further investigations into DeLay.

The Campaign For America's Future said it would run an ad in The Washington Times, widely read by conservatives in Congress. It says DeLay does not measure up to the ethical standards of former Presidents Reagan and Eisenhower or the late Sen. Barry Goldwater, the GOP presidential candidate in 1964.

Separately, the American Project Action Fund unveiled a Web site, www.DropTheHammer.org,urging consumers to contact businesses that have donated to DeLay's Legal defense Fund. "Let these corporations know that unless they stop supporting Tom DeLay, you'll stop supporting them," it says.

In addition to questions about DeLay's overseas travel, three of his associates are under indictment on state charges in Texas on campaign finance charges.

Also, lobbyist Jack Abramoff, long close to DeLay, is under investigation by the Justice Department and the Senate Indian Affairs Committee for work he did for Indian tribes.