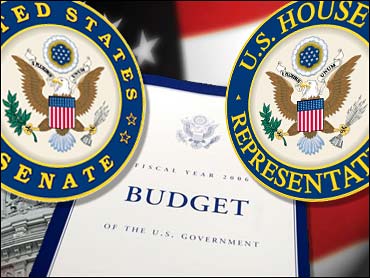 House and Senate Republican leaders have a tentative agreement on a budget that envisions $10 billion in Medicaid savings over the next five years and at least $70 billion in tax cuts, congressional officials said Thursday.

These officials, who spoke on condition of anonymity, said the tentative agreement also relies on savings from farm, student loan and pension programs to achieve the goal of cutting deficits in half over the next five years.

The budget blueprint itself is nonbinding and does not require President Bush's signature. At the same time, it anticipates that Congress will enact follow-up legislation to implement its goals.

Overall, officials said the agreement envisioned savings of roughly $35 billion over five years from federal benefit programs. If implemented, it would mark the first time since 1997 that lawmakers have looked to this type of program for savings.

The largest single portion of the $35 billion would come from Medicaid, which provides health care for low-income Americans, officials said.

In political maneuvering over the issue this year, Democrats have repeatedly accused Republicans of planning cuts in the program. Republicans respond that despite the anticipated changes, overall Medicaid spending would rise annually from current levels.

GOP leaders have been haggling for days in hopes of nailing down an agreement before the Senate begins a weeklong break on Friday. Officials said leaders in both houses were checking with members of the rank and file before sealing their agreement, making sure they would be able to pass it.

Under arcane congressional rules, budget legislation is filibuster-proof in the Senate, meaning that supporters need only 51 votes to pass related spending and tax measures. Republicans hold 55 seats in the Senate. Two officials said there was concern among House GOP leaders, fearing defections from conservatives who want even deeper deficit reductions.