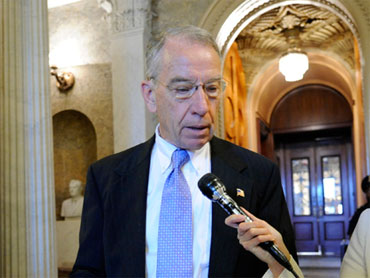 The embattled community activist group ACORN appears to be collecting charitable contributions through affiliate organizations that it then uses for impermissible lobbying and political activity, says the Republican staff of the Senate Finance Committee.

The assessment, in a memo to Sen. Charles Grassley, R-Iowa, further fuels the controversy surrounding ACORN, formally known as the Association of Community Organizations for Reform Now.

The GOP staff memo says ACORN-affiliated charities are being used to raise money which is then funneled to other charities or other organizations for purposes other than what a donor may have intended.

In response, ACORN chief executive Bertha Lewis called the allegations "politically motivated, false and part of a long-standing campaign against this grass-roots organization carried out by partisan right-wing conservatives."

Lewis said that political activities such as lobbying are paid for with membership dues and that "every dollar that we spend we spend legally in accordance with government regulations."

ACORN, the parent entity, is not tax-exempt, but dozens of ACORN affiliates around the country are tax-exempt.

On Thursday, Grassley asked Internal Revenue Service commissioner Douglas Shulman to explain how the agency audits organizations like ACORN "where the movement of money appears to be a shell game."

"Do IRS audit procedures require auditors to follow the money trail to or from a charitable organization to determine whether that money is being used for impermissible activities, including electioneering and promoting illegal acts?" asked Grassley.

The Republican staff said 42 tax-exempt organizations have some affiliation with ACORN and that 52 other affiliated entities are taxable.

ACORN says that since Lewis took over as CEO in June 2008, the organization has closed more than 100 redundant or unused corporate entities. About 25 such entities remain, and more will be closed by the end of 2009, the group says.

"You cannot move money from a charity and to another entity for a purpose that the charity could not do," Dean Zerbe, a former counsel to the Senate Finance Committee, said in an interview. Zerbe is now national managing director of Alliantgroup LP, a provider of specialized tax services for businesses.

In response, Lewis said that Zerbe's assessment of what the law requires is correct and that ACORN fully complies with it.

ACORN has been under fire over videotapes of ACORN employees offering advice about how to establish a brothel with underage prostitutes.

Separately, ACORN employees and volunteers have been involved in a number of voter registration fraud cases. Many of the group's offices are in heavily Democratic inner city neighborhoods.