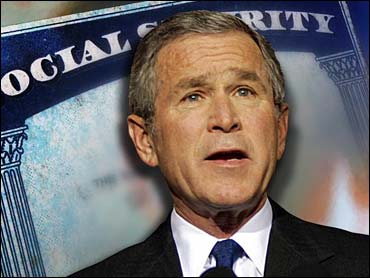 At the same time, these officials said GOP leaders were wary of leaving the impression they intend to abandon Mr. Bush's proposal to allow younger workers to invest a portion of their payroll taxes independently.

In the end, leaders remain determined to deliver what the president wants, they added.

"The attempt ... has always been to find Democrats to come on board with a bipartisan plan, and what has been stopping this is the issue of personal accounts," said one official familiar with the deliberations.

Any shift in tactics has the potential to embolden Democratic critics who say Mr. Bush's proposal would privatize Social Security and lead to benefit cuts and a large increase in the national debt.

At the same time, it could undercut the current 60-day campaign by the White House to build public support for the president's approach.

Mr. Bush "wants to save Social Security permanently and give future workers personal accounts and a better retirement," Duffy said. "He welcomes any activity that moves us in that direction."

Reid has said numerous times he is willing to seek bipartisan legislation on Social Security once the president abandons his call for personal accounts.

Republican officials said senior Senate GOP lawmakers had discussed at least two approaches, without a clear decision on how to proceed.

One involved quietly acquiescing in an effort by one of several senators with an interest in Social Security to see whether they could attract Democratic support for a bill that addressed the program's solvency problems but omitted personal accounts.

The other involved sanctioning an effort by Sen. Charles Grassley, chairman of the Senate Finance Committee, to see whether Democrats on the panel would be willing to join in talks.

One difficulty with the first option is that it bypasses the committee that already has begun preliminary work on the issue and has jurisdiction over the program.

The difficulty with tapping the committee is a political one, according to one official, who said it would clearly associate Republicans with a bill that jettisoned, however temporarily, the centerpiece of Mr. Bush's plan.

Grassley has said he intends to hold hearings this month and present legislation to the committee this summer. He told reporters from his home state this week that while Democrats are united against personal accounts, he believes there are several who are willing to discuss the outlines of a bill to make Social Security solvent.

Numerous proposals have been floated to address the program's long-term funding problems, including extending the payroll tax beyond the current limit of $90,000 in income, raising the retirement age or reducing benefits for future retirees.

In the call-in news conference on Wednesday, Grassley said a proposal by Sen. Robert Bennett, R-Utah, has been widely discussed. It involves reducing guaranteed benefit levels for some future retirees, based on the income they earned over their careers. There would be no reduction for future retirees in the bottom 30 percent of wage earners, and current beneficiaries would be unaffected.

In the House, majority Republicans are also proceeding with caution on the issue, concerned about possible political repercussions in the 2006 elections.

Rep. Roy Blunt of Missouri, the GOP whip, declined this week to set a timetable for action, although he said the leadership remains committed to passing legislation this year.

Mr. Bush urged Congress in January to approve legislation that would create permanent financial solvency for Social Security, and include an option for younger workers to set aside a portion of their payroll taxes for personal investment.

In exchange, all workers under 55 would receive lower benefits than they are now guaranteed under the law. Individuals who opt for personal accounts would face a deeper cut, on the assumption that their individual investments would make up the difference.

Mr. Bush and other supporters of these accounts say they could lead to a more robust return on investments for millions of workers and allow them to build retirement nest eggs.

To support their call for an overhaul of the program, they cite forecasts that without action, the Social Security trust funds will be depleted in 2041 and all benefits will be cut as a result.