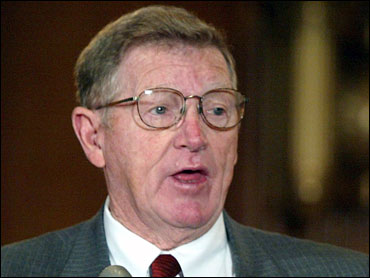 Retreating under fire, Republican Sen. Conrad Burns of Montana will return about $150,000 in donations that he received from indicted lobbyist Jack Abramoff and his associates, the chairman of the senator's re-election campaign said Friday.

Democrats have criticized Burns for his connection to the lobbyist at the center of a federal probe that has entangled at least a half dozen lawmakers and Bush administration officials. Earlier this week, a spokesman for Burns said the senator would not return the money because it had already been spent.

The Associated Press has reported that in 2001 the Montana Republican and his staff met Abramoff's lobbying team on at least eight occasions and collected $12,000 in donations around the time that Burns took legislative action favorable to Abramoff's clients in the Northern Mariana Islands.

Donations to Burns included money directly from Abramoff and a key garment company executive in the islands. The executive was part of the coalition paying Abramoff's firm to fend off stronger U.S. regulations on the Pacific islands.

The Justice Department is investigating whether Abramoff, already charged with fraud in a separate Florida case, won any undue influence through donations and favors.

Burns faces re-election next year and the link to Abramoff has created a flurry of headlines in his home state. The senator, first elected in 1988, won a third term with just 51 percent of the vote in 2000.

Burns has said he hasn't been contacted by federal investigators in the Abramoff inquiry or received any subpoenas. Last month, Burns wrote to Attorney General Alberto Gonzales, urging that his conduct be reviewed so he could be cleared of wrongdoing.

"I welcome your thorough and expeditious review of this matter so that it may be disposed of officially once and for all and these outrageous and wrongful allegations may be put to rest before we get into the 2006 re-election cycle," Burns wrote.

In 2001, Burns served on the Senate Energy and Natural Resources Committee, which was considering legislation the Marianas opposed. He also ran a Senate appropriations subcommittee that controlled spending for the Interior Department, which regulates U.S. territories, including the islands.

On May 23 of that year, Burns voted against a bill in the Senate Energy Committee that would have phased out a nonresident contract worker program benefiting the Marianas' garment industry. The committee approved the bill, but it never saw action on the Senate floor. In 1999, it had moved through the same committee by voice vote without objections from Burns.

Burns' office told The Associated Press that he could not recall why he didn't object to the bill in 1999 but that his opposition in 2001 was prompted by a report indicating changes to immigration laws could hurt the islands' economy. He said it wasn't influenced by Abramoff or any donations.

Earlier this week, the top Democrat on the Senate committee investigating Abramoff's Indian lobbying said he was returning $67,000 in donations in response to AP reports that he collected tribal money around the time he took actions favorable to those of Abramoff clients.

Sen. Byron Dorgan, D-N.D., said Tuesday that while he never met Abramoff and didn't take any actions at the lobbyist's behest, he nonetheless wants to return the money to avoid any appearances that tribal money was directed to him by the controversial lobbyist.