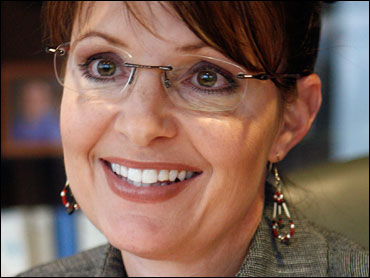 Here is an interesting twist on the McCain campaign's determined effort to shut down the investigation of Alaska Governor Sarah Palin's abuses of power in what has come to be known as the "Troopergate" scandal.

Palin stands accused of dismissing the state's public safety commissioner because he would not fire her former brother-in-law, a state trooper with whom the governor was feuding after he and her sister divorced.

If Palin did so abuse her office, she could face any number of penalties, up to and including impeachment as governor. That would make it harder to pitch Palin as an "original maverick" reformer.

The McCain camp has tried a number of moves since Palin's selection to close down the bipartisan inquiry -- which was approved by the state's Legislative Council but is being conducted by a respected former prosecutor -- into the governor's alleged wrongdoing. If Alaska was a typical state, this partisan move might have worked. But Alaska is a very small state where top Democrats and Republicans have traditions of working together -- especially on ethics inquiries.

So, even though Republicans dominate the legislature, the McCain camp has been rebuffed.

Now, McCain's aides have gotten a handful of legislators who are tied to the campaign to file a suit in Alaska's Superior Court demanding that the investigation be halted. The clear goal is to prevent the completion of what is likely to be a damning report regarding Palin's misdeeds before election day -- as was evident when McCain aides suddenly began appearing on national news shows, fully briefed and ready to cheer on the suit, just moments after Alaskans learned it was being initiated.

What are the grounds for this suit? state Sen. Hollis French, who is managing the investigation at the behest of the legislature, is a Democrat who backs Barack Obama for president.

The five legislators name French and another Democratic legislator, Kim Elton, in the suit, as well as special investigator Stephen Branchflower and the Alaska Legislative Council. "The Partisan actions of Sen. French, Sen. Elton and the Legislative Council have tainted the investigation beyond the appearance of impartiality required under the Alaska Constitution," claims Kevin Clarkson, Esq., of the firm Brena, Bell & Clarkson, P.C., and counsel in the suit.

Here's the amusing part: The Alaska Legislative Council is a permanent interim committee of the Legislature and is responsible for conducting the business of the full Legislature when it is not in session.

The Council, which approved the Troopergate inquiry and is paying for it, and which has stood behind French despite the partisan attacks, is made up of 8 Republicans and 4 Democrats.

In other words, the McCain campaign's allies in Alaska are suing Republicans in order to protect Palin from a bipartisan inquiry.

Needless to say, the national McCain operatives who appeared on cable news shows to promote the suit failed to mention that detail.
By John Nichols
Reprinted with permission from The Nation