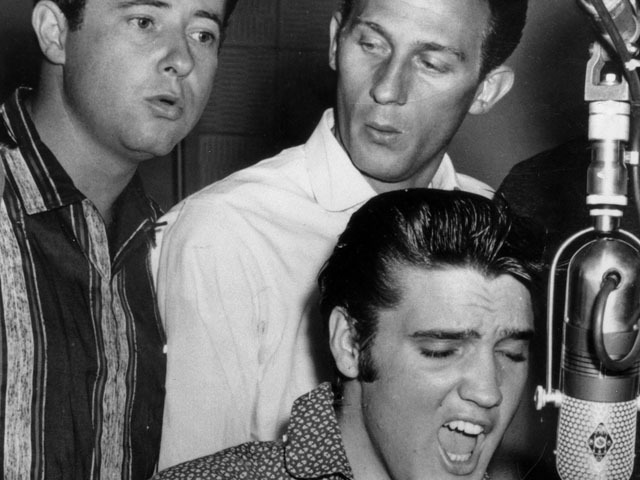 NASHVILLE, Tenn. Gordon Stoker, a member of The Jordanaires vocal group that backed Elvis Presley, died Wednesday. He was 88.

His son, Alan, told The Associated Press that Stoker died at his home in Brentwood, Tenn., after a lengthy illness. Stoker, who was born in Gleason, Tenn., got his start playing the piano on WSM radio and its signature show, the Grand Ole Opry.

Alan Stoker said his father was just 15 when he started playing professionally. He joined the Jordanaires as a piano player, but then became tenor vocalist. The group was already well known for their gospel singing when Presley recruited them to perform on his recording of "Hound Dog," in 1956.

The Jordanaires originated in Missouri and came to Nashville, where they backed Red Foley on a segment of the Opry called the "Prince Albert Show," according to John Rumble, senior historian at the Country Music Hall of Fame and Museum.

Rumble said they drew on both black and white gospel music, as well as many of the hymns Stoker knew by heart from his childhood in rural West Tennessee.

The quartet soon developed a national audience after performing on the Opry and the nationally syndicated show, "Eddy Arnold Time."

They recorded and performed for years with Elvis, who was a huge gospel fan, Rumble said. In some of the early Elvis recordings, such as "It's Now or Never," and "Are You Lonesome Tonight?" their vocals really stood out, he said.

The Jordanaires also performed with Patsy Cline on "Crazy," with Jim Reeves on "Four Walls," on George Jones' 1980 hit "He Stopped Loving Her Today," and on Kenny Rogers' "Lucille."

They were elected to the Country Music Hall of Fame in 2001.