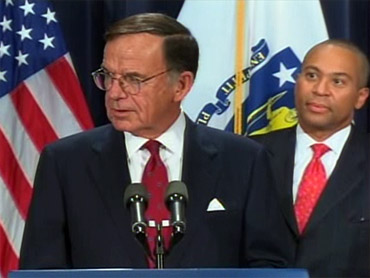 "This appointment is a profound honor, and I accept it with sincere humility," said Kirk, a former close friend and aide of the longtime legislator.

Kirk will serve until Massachusetts voters go to the polls to determine who will serve out the remaining three years of Kennedy's term. A primary will be held in December and a general election in January.

Kirk vowed not to be a candidate in that race.

In making the appointment, Patrick, a Democrat, explicitly stated that Kirk "will carry on the work and the focus of Senator Kennedy, mindful of his mission and his values and his love of Massachusetts."

"This is a caretaker appointment, a gentle and difficult transition, a kind of stewardship," added Sen. John Kerry. who has been the sole Massachusetts Senator since Kennedy's death.

Kerry said that though it was "no easy call" to select Kirk, he believed the choice was in the best interests of Massachusetts. He said Kirk would be "a superb steward" who will "hit the ground running."

Patrick thanked the legislature for taking the "very swift action" to give him the power to appoint an interim replacement for Kennedy, saying the citizens of Massachusetts needed adequate representation in the Senate.

"The issues before the Congress and the nation are simply too important to Massachusetts for us to be one voice short," he said.

Noting that the Senate is in the middle of a fierce battle over health care reform, Patrick evoked Kennedy's work in favor of reform, noting that the late senator had called health care "a right, not a privilege." Kirk's appointment will mean that a filibuster-proof majority of 60 senators will again caucus with the Democrats in the Senate.

"I am pleased that Massachusetts will have its full representation in the United States Senate in the coming months, as important issues such as health care, financial reform and energy will be debated," President Obama said in a statement released shortly after the announcement. "Paul Kirk is a distinguished leader, whose long collaboration with Senator Kennedy makes him an excellent, interim choice to carry on his work until the voters make their choice in January." 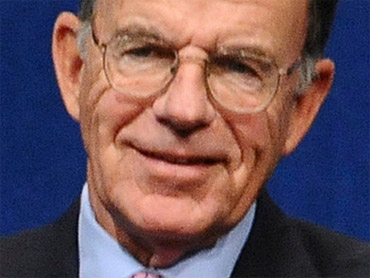 (AP Photo/Lisa Poole)
Kirk, a 71-year-old attorney and Harvard law graduate who has worked as a pharmaceutical lobbyist in the past, is a past chair of the Democratic National Committee. He lives on Cape Cod and chairs the Board of Directors of the John F. Kennedy Library Foundation. Kirk vowed to resign from the boards on which he serves in order to address conflict of interest questions.

Massachusetts and national Republicans have complained that Democrats were hypocritical in passing a bill allowing Patrick to make the appointment. They noted that state Democrats blocked efforts to allow such appointments when a Republican governor, Mitt Romney, was in office.

"The Democrats' power play in Massachusetts has nothing to do with principle, and everything to do with politics," said Rob Jesmer, Executive Director of the National Republican Senatorial Committee. "...Democrats in Washington desperately need another vote in the U.S. Senate, and it is clear that this Administration will stop at nothing to ram it through the Congress."

Former Massachusetts Governor and Democratic presidential nominee Michael Dukakis was among the other names that were mentioned as possible appointees. Patrick said there were six candidates of the short list.

Kirk was was strongly pushed by Kennedy family to be selected. His supporters included both of Kennedy's sons, Patrick and Edward, as well as his widow, Victoria Reggie Kennedy.

In a statement, the Kennedy family said the late senator "would be so pleased" that Kirk was selected.

"Senator Kennedy and Paul were close friends and they worked together for many years, starting with Paul's tenure on the Senator's staff in Washington four decades ago," they said. "Side by side they fought many battles for progress and social justice, and nothing could be more fitting than for Paul now to carry on that fight."

Kirk vowed to retain Kennedy's "talented, hardworking and most effective" staff. He asked for the prayers of the people and said "we should always continue to give thanks for Ted Kennedy and pray for his peace."

Kirk said he expects to be sworn in tomorrow.