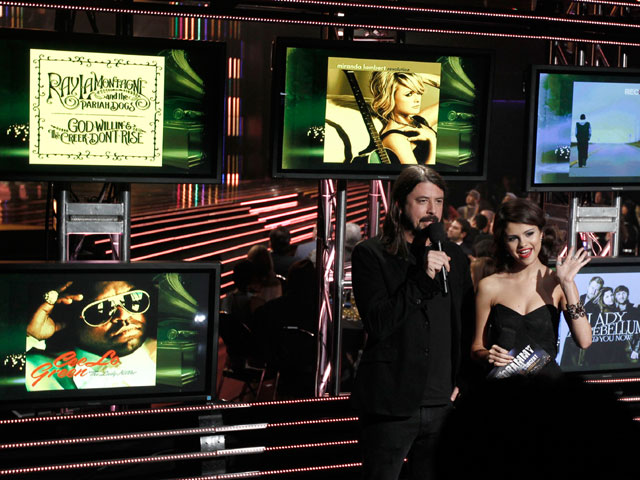 Eminem's "Recovery" was made complete on Wednesday night as the Recording Academy nominated the resurgent rapper for 10 awards, including the biggest prizes: album, song, and record of the year.

Bruno Mars was not far behind with seven nominations, and Lady Antebellum, Jay-Z and Lady Gaga all had six each. Gaga also was nominated for album of the year - the second straight nomination in the category for her.

Other key nominees included Cee Lo: His profane but profound "(Expletive) You" was nominated for record and song of the year.

The nominations were announced as part of an hourlong CBS special from Club Nokia in Los Angeles that featured performances by nominees such as Mars, Katy Perry, Justin Bieber, Train and Miranda Lambert.

For Eminem, "Recovery" was a critical and commercial triumph. It became the best-selling album of the year so far, with more than three million copies sold, and spawned top hits like "Love the Way You Lie" featuring Rihanna, which was nominated for song and record of the year.

Country trio Lady Antebellum's album "Need You Now" was the second-best selling album of the year, fueled by the lovelorn title track. Grammy voters rewarded that success, nominating them for album of the year and also record and song of the year for the crossover hit.

Other nominees for record of the year included the rap hit "Nothin' On You" by newcomer B.o.B featuring Bruno Mars, and Jay-Z and Alicia Keys' anthem for New York, "Empire State of Mind."

Rounding out the nominations for song of the year were Ray LaMontagne's "Beg Steal Or Borrow" and Lambert's hit "The House that Built Me," written by Tom Douglas and Allen Shamblin.

Perry's "California Gurls" was one of the year's top hits but was shut out of the record and song of the year categories. Yet the pop star, who kicked off the broadcast with a performance of the song wearing a sparkly silver mini-dress, was far from disappointed: Her album "Teenage Dream" was nominated for album of the year, along with Gaga's "The Fame Monster," "Recovery," "Need You Now" and Arcade Fire's "The Suburbs."

"It's amazing. It's like no other award show because I feel like you're being recognized by your peers," she said during the show. "And there's so many fantastic performers and artists that could be in this category, so when they nominate you, it feels like a win."

Bieber appeared on the show from London and was rewarded for staying up late: he was nominated for best new artist in a category that also included Drake, Florence & the Machine, Mumford & Sons and jazz artist Esperanza Spaulding.

"It feels amazing. I can't believe I'm in this position. Thank you to the fans," he said. "I don't know what to say."

The Grammys will be handed out on Sunday, Feb. 13, at the Staples Center in Los Angeles and broadcast live on CBS.