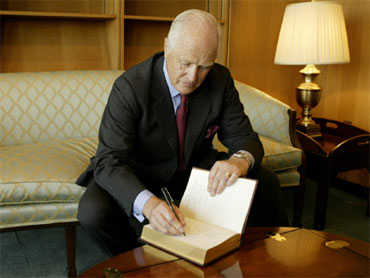 Winston S. Churchill, a former conservative member of Parliament and grandson of Britain's wartime leader, has died. He was 69.

The politician had been diagnosed with cancer two years ago.

Earlier he had been a foreign correspondent for The Times, The Daily Telegraph and other publications. He reported from the Middle East during the Six Day War in 1967.

Winston Spencer Churchill was born at Chequers, the prime minister's official residence, on October 10, 1940, the same month victory was claimed in the Battle of Britain.

His father, Randolph Churchill, was also a Tory MP.

In 2007 Churchill helped found the U.K. National Defense Association (UKNDA), which campaigns for improved resources for the armed forces.

UKNDA's chief executive, Commander John Muxworthy, said in a statement that Churchill, the organization's president, "bravely and doggedly fought" his protracted battle with cancer, and that his death was "a greater tragedy for the country which he served devotedly for many years."

Muxworthy called Churchill "a true patriot" who never faltered in his devotion and commitment to the country.

BBC News reports that 15 years ago Churchill sold his grandfather's World War II papers to Churchill College, Cambridge, for £12.5m, paid for out of the National Lottery funds.

Critics called the sum excessive and said the documents were government property. Churchill said the papers belonged to the family.

The BBC also noted that in 2004 documents were released that suggested the government rejected an offer by the Churchill estate's trustees to purchase the papers for a mere £100,000.