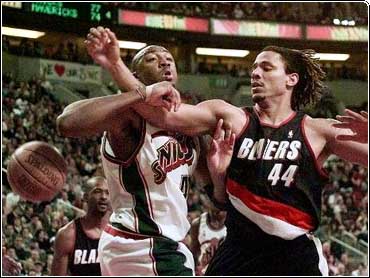 Forward Brian Grant has rejected a seven-year contract with Portland worth more than $90 million that would have sent him to the Cleveland Cavaliers in a sign-and-trade deal for Shawn Kemp.

"I think this speaks volumes about the man," said Mark Bartelstein, Grant's agent. "It's incredibly unbelievable, in this day and age, for an athlete to say so strongly, 'It's not about the money.' "

Grant told the Cavaliers of his decision Thursday while on vacation in Jamaica. He had met with general manager Jim Paxson and coach Randy Wittman in Cincinnati on Tuesday.

The Trail Blazers and Cavaliers had arranged a deal in which Grant and another Blazers free agent, probably guard Gary Grant, would have re-signed with Portland and been traded for Kemp.

The Cavaliers were hoping to get out from under Kemp's contract. The forward has four years and $71 million remaining on the deal.

COVID-19 becomes top killer in the U.S. as hospitals fill up