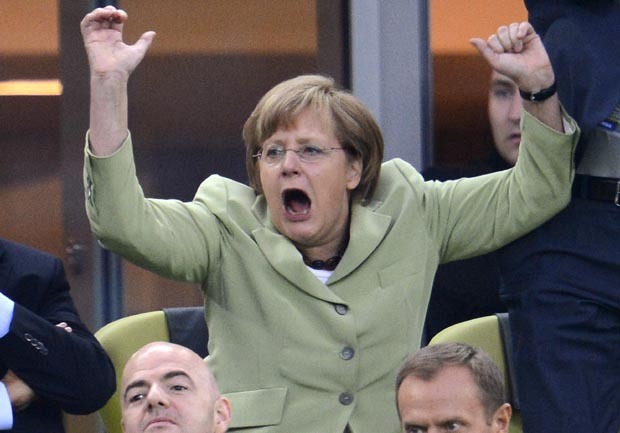 (AP) GDANSK, Poland - A trio of second-half goals put Germany into the European Championship semifinals for a record seventh time Friday after a 4-2 win over Greece.

Philipp Lahm gave Germany the lead in the 39th minute before Georgios Samaras equalized for Greece in the 55th. But Sami Khedira, Miroslav Klose and Marco Reus all scored to pull Germany clear.

"We made some silly mistakes but at the end we scored four goals," Lahm said. "We had many chances in the first 10-15 minutes."

German Chancellor Angela Merkel made the trip for the match and stood to cheer every time her team scored.

The match was played amid the political backdrop between the countries. Germany has been a major contributor to economic bailouts for Greece and was instrumental in demanding unpopular spending cuts.

Germany dominated nearly the entire match at the Arena Gdansk, but the Greek defense held strong for much of the first half. Lahm finally put his team in front by controlling the ball with his chest and dribbling toward the middle before sending a long-distance shot into the corner off the hand of Greece goalkeeper Michalis Sifakis.

The Greeks looked better at the start of the second half, and even equalized when Samaras knocked the ball past Germany goalkeeper Manuel Neuer after a perfect cross from Dimitris Salpigidis.

"When we conceded a second goal we had to open up and that cost us," Salpigidis said. "I hope the Greeks got some encouragement from watching us fighting."

But after that goal, it was back to being all Germany.

Khedira volleyed in a cross from Jerome Boateng in the 61st, and Klose headed in a free kick from Mesut Oezil in the 68th as Sifakis was late to punch the ball away. Reus made it 4-1 in the 74th, volleying a shot in off the underside of the crossbar after Sifakis had saved from Klose.

"One-one was unnecessary but we kept looking for chances," Reus said. "We kept attacking and the goals finally came."

Salpigidis added a consolation penalty for Greece in the 89th after Boateng handled.

"We scored twice. We did what we could," Greece defender Sokratis Papastathopoulos said. "Maybe we could have been a bit more careful but we fought hard, we fought for the whole of Greece."

Germany coach Joachim Loew dropped his three main forwards for the match, including leading striker Mario Gomez, but their replacements did just fine.

Klose, who has Polish heritage, constantly troubled the Greek defense and linked up well with Oezil and Andre Schuerrle.

Greece had one major change in its lineup, but it was because of suspension. Captain Giorgos Karagounis sat out the match after picking up a yellow card in the 1-0 win over Russia for diving.

Without him in the midfield, the Germans had little trouble controlling the play and creating chance after chance.

"We made it to the last eight and this is very important," Papastathopoulos said. "The Netherlands didn't make it and we are talking about a very big country in football terms."