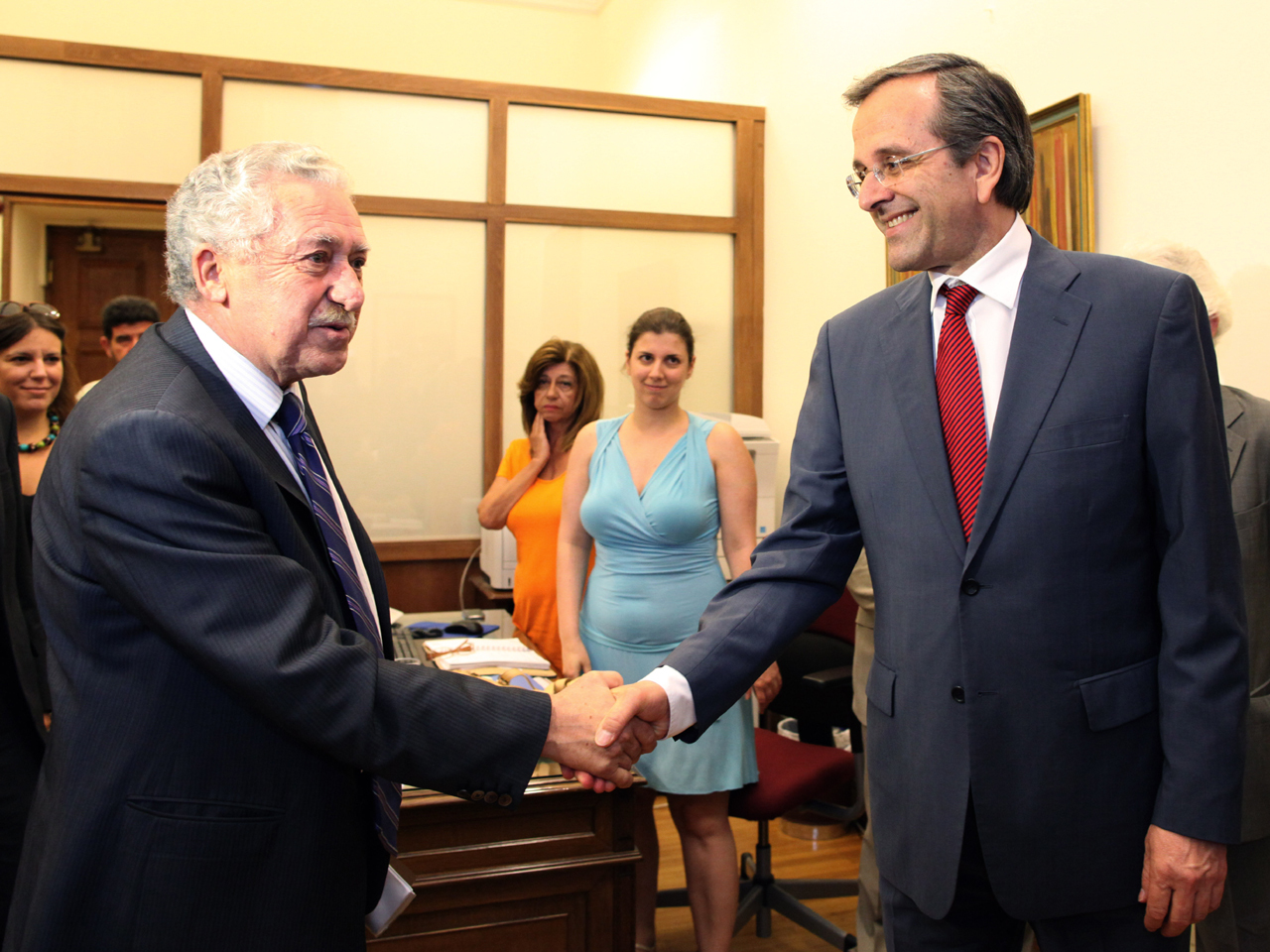 Antonis Samaras' New Democracy party came first in Sunday's vote, winning 129 of Parliament's 300 seats — not enough for him to govern alone. He is seeking an alliance with the third-placed Socialist PASOK and the smaller Democratic Left party. New Democracy and PASOK took part in a 6-month coalition government earlier this year.

President Obama, meanwhile, was at an economic summit in Mexico trying to land assurances that Europe is closing in on a financial crisis response that will calm the markets and keep the continent's woes from undermining the world.

Obama, as leader of the giant but struggling U.S. economy, remains central to the Group of 20 summit talks wrapping up Tuesday in this coastal resort region. But it is the European members gathered there, led by Germany and its chancellor, Angela Merkel, who carry both the power and responsibility to stabilize a eurozone reeling from debt, banking and political problems.

Obama sent some upbeat signals Monday amid a sense of global relief that Greece would not likely renege on its bailout terms and ditch the euro currency. Obama left a meeting with Merkel feeling "encouraged" about Europe's direction, a spokesman said, as an even more consequential European summit on the crisis approaches in Brussels. (Click player at left to see Obama speak on euro crisis)

Kouvelis said the Greek parties first had to agree on a policy platform, and on who would be appointed to the cabinet.

"The country must have a government," he said.

Venizelos, who has pressed for an agreement by Tuesday night, said he was confident a deal could be reached.

"I am confident after my meeting with Mr. Kouvelis, our views are very close," he said.

Both the conservatives and PASOK have pledged to respect the commitments for further austerity and reforms that Greece undertook as conditions for two massive international bailouts. The Democratic Left is anti-austerity in principle, but wavering. Leaders of New Democracy have said they will seek to renegotiate the terms of the bailout deal with their European neighbors and the International Monetary fund.

German Foreign Minister Guido Westerwelle said Monday the substance of Greece's austerity and economic reform program was non-negotiable, but the timing of its deficit reduction goals might be adjusted, according to the Reuters news agency.

"We're ready to talk about the timeframe as we can't ignore the lost weeks and we don't want people to suffer because of that," Westerwelle told a radio program.

A German government spokesman, however, told Reuters now was not the time to give Greece "a discount".

However, Deputy Finance Minister Steffen Kampeter, told a German television station it was "clear to us that Greece should not be over-strained," according to Reuters.

It is unclear what points of the bailout agreement a new Greek coalition will seek to renegotiate with Europe and the IMF.

In order to pass most laws, a government needs a simple majority of 151 seats. But to have any chance of success, it would require considerably more than that, especially amid the social turmoil of the past two-and-a-half years of harsh austerity in Greece.

Together with PASOK and the Democratic Left, Samaras' party would have 179 legislators, enjoying a strong majority of 28 seats. The second-placed, anti-bailout Syriza radical left party has refused to join in a coalition.

Samaras' three-day mandate to form a government expires on Wednesday. If it fails, Syriza would get a chance to form a government, followed by the Socialists. But Syriza leader Alexis Tsipras has said he will not even try to create a government. Venizelos has advocated circumventing the mandate process and proceeding straight to a meeting of party leaders under President Karolos Papoulias.

Venizelos has insisted that Syriza should participate in any coalition government, in what appears more an attempt to show the left-wing party up as intransigent rather than a realistic effort to drag it into governance.