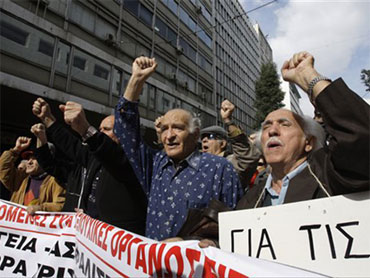 With creditors demanding solutions to the Greek debt crisis and the financial world increasingly on edge, Athens on Wednesday froze pensions, cut civil service salaries and slapped new taxes on everything from cigarettes and alcohol to fuel and precious gems.

Markets and the European Union reacted well to the euro4.8 billion austerity plan. But Greek unions were outraged - and the country's embattled premier, who had likened the situation to a "state of war," is headed to Germany and France seeking more definite expressions of support.

Prime Minister George Papandreou warned that unless the new measures won European Union and market backing, bringing down the cost of borrowing for the country, Greece would turn to the International Monetary Fund.

Such a move would be unpalatable for the European Union, highlighting the bloc's inability to manage the crisis on its own.

"From today the problem can't be considered 'Greek.' We are doing what we must and more," Papandreou said. "So now, it is the time of Europe." If the EU and the markets don't respond "as we would wish, because of speculative behaviour, our last resort would be the International Monetary Fund."

Greece is already receiving technical help from the IMF, but has not yet appealed for a bailout. The IMF has bailed out EU members Hungary, Romania and Latvia, as well as non-members Iceland, Ukraine, Belarus and Serbia - but never a member of the euro.

Finance Minister George Papaconstantinou said the IMF would not have imposed any harsher measures had Athens already appealed to it, and would have provided financial aid in return.

"The difference is that the IMF has money on the table - something that is not the case so far from Europe," Papaconstantinou said on Mega television later Wednesday.

While Athens wants a European rather than an IMF solution, "we cannot close the door at a time when we have not yet safeguarded that the country will continue to borrow ... at rates that are not outrageous."

What Greece wants is a clear indication from Europe that it would receive help if that became necessary, he said.

The minister said the perception of Greece had been that it wasn't facing up to its responsibilities.

"That has broken today," he said.

The IMF in Washington said it approved of the new plan, which is to be voted on in Parliament Friday.

"They're clearly delivering what the euro group members and the Commisson have asked for, and more," she told Britain's Sky News Wednesday night. "Actually Greece is beating expectations when it comes to measures to reduce its deficit and to cut on its spending."

But she said there was "no need" for other euro-zone countries to now contribute money to help stabilize Greece's finances.

Papandreou said the measures, which amount to savings of $6.5 billion, or roughly 2 percent of gross domestic product, were "not taken out of choice but out of necessity."

Savings will be split evenly between increasing revenue and slashing spending. Tax increases include a 20 percent hike for alcohol, a 65 percent increase on cigarettes and raising sales tax, or VAT, from 19 percent to 21 percent. Cuts include curbing civil servants' pay, cutting bonuses and stipends and freezing pensions.

Papaconstantinou said the government could not yet clarify whether the pay cuts would extend to coming years.

Greece shocked its EU partners in October when Papandreou's newly elected Socialists revised the budget deficit to a staggering 12.7 percent of gross domestic product in 2009, from earlier estimates of below 4 percent. The crisis has hammered the euro, the common currency used by 16 nations, and made Greece's cost of borrowing on the international markets skyrocket. It has also sparked market expectations of some sort of bailout led by Germany and France.

Athens has repeatedly said it wants EU help to borrow money at lower rates, but European officials have remained tightlipped over any potential rescue plan.

Papandreou heads to Berlin Friday to meet with German Chancellor Angela Merkel - whose country is highly reluctant to indicate concrete assistance - and then to Paris for talks with French President Nicolas Sarkozy before flying to Washington to meet President Obama.

Greece had taken an "important step" toward realizing its goal of cutting its budget deficit, Merkel said in Berlin.

Although Greece announced an austerity plan in January, it won only lukewarm support from the EU and didn't calm jittery markets. But the latest batch of budget cuts won early approval from the EU and leading credit ratings agencies Moody's Investor Services and Fitch Ratings, both of which had downgraded Greece's credit rating in December.

EU Economy Commissioner Olli Rehn, who had demanded new measures during a visit to Athens Monday, described the new plan as a "potential turning point."

"I can see that there is a very strong determination and unity to reform the country and put the public finances under control. This can be made a real turning point in the fiscal history and economic development of Greece," he said.

Moody's said the austerity measures were a "clear manifestation" of the government's resolve, and that it should be allowed time to follow through and implement the measures, while Fitch Ratings said that "politically challenging measures like a rise in VAT and further cuts in public sector pay indicate that the Greek authorities are indeed serious about cutting the deficit."

While the markets were happy, Greece's labor unions were not.

"These measures are terrible. I think the government does not realize how little people in this country are being paid," said Despina Spanou of the civil servants union ADEDY. "We have no other choice other than to step up (our protests)."

The union has already called its third 24-hour strike for March 16.

Smaller business owners warned that the cutbacks would eat into their earnings, forcing closures and cutting jobs. Greek unemployment hit a five-year high of 10.6 percent in November.

"Obviously, we must expect a fall in consumer demand," the Athens chamber of small and medium-sized industries said.

"This carries the threat of a further decrease in company turnover, directly endangering the functioning of smaller businesses, increasing unemployment and in consequence reducing state tax revenues instead of boosting them."