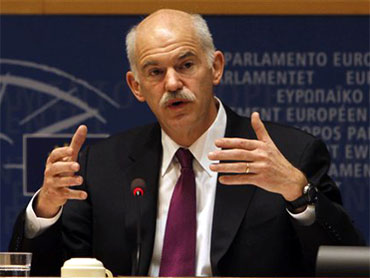 Greece warned Thursday that it will be forced to turn to the International Monetary Fund if the EU can't agree to a bailout plan next week that will help reduce its market borrowing rates.

Greece is paying a high price to sell bonds because investors fear its massive budget gap this year could cause it to default on debt payments. It needs to borrow some euro54 billion ($74 billion) this year and euro20 billion of that in April and May.

Prime Minister George Papandreou said he expects European Union leaders to decide at a March 25-26 summit on a blueprint of aid from the 16 eurozone countries.

He said he wasn't asking for money but a clear mechanism for financial help in case Greece can't afford to borrow from markets.

"That alone would be enough to make sure that the speculators would be warned off," he said. "I think it's an opportunity to make a decision next week at the summit."

He said an EU failure to agree any plan would force Greece to go to the IMF, although hopefully "that will not be necessary."

Papandreou said going to the IMF, which imposes austerity measures on governments in return for financial aid, would not hurt his country because Greece has already followed IMF advice and made the painful spending cuts.

"They will ask us for nothing more," said Papandreou of the IMF.

An IMF bailout for Greece would be a huge embarrassment for the 16-country eurozone and proof that the structural flaws that surfaced during the debt crisis are beyond the nations' control.

It would also make the IMF the final judge of whether Greece was doing enough to get its economy on track. Currently, such decisions are made jointly by eurozone governments on the advice of the EU's executive commission.

Papandreou said Greece is now playing for time and needs "breathing space" from intense market pressure to allow it to borrow cheaply and push through a tough austerity program to reduce its massive budget gap from 12.7 percent of gross domestic product to the EU limit of 3 percent by 2013.

"If we keep borrowing at very high rates, and this is the challenge we have, we cannot sustain the deficit reduction that these hard measures aim to achieve," he told a European Parliament committee that is investigating the effects of the financial crisis on the region.

"We are asking our people - workers, wage-earners, pensioners - to take a cut in order that we cut the deficit and that could be eaten up ... in a few moments in speculation on the world markets," he said.

Papandreou said he wanted Greece to borrow at similar rates to other members of the currency union, such as Germany. But his hopes that the eurozone or IMF will offer loans at cheaper rates than markets may be unrealistic.

"Within the eurozone, we have one currency, we should have similar types of loans," he said.

But eurozone finance ministers warned Monday that any loans from them would not charge "favorable" interest rates to discourage countries from seeking bailouts.

Germany, the richest eurozone nation, is reluctant to bail out Greece and German Chancellor Angela Merkel even suggested Wednesday that countries that persistently break EU budget rules - such as Greece - should be expelled from the currency union.

French Finance Minister Christine Lagarde told reporters Thursday that her country had no major difference with Germany on the importance of stronger economic governance to maintain the "stability and durability" of the euro.

"We want to improve the convergence and the coordination of economic policies. We share those objectives," she said during a visit to Brussels to see EU officials.