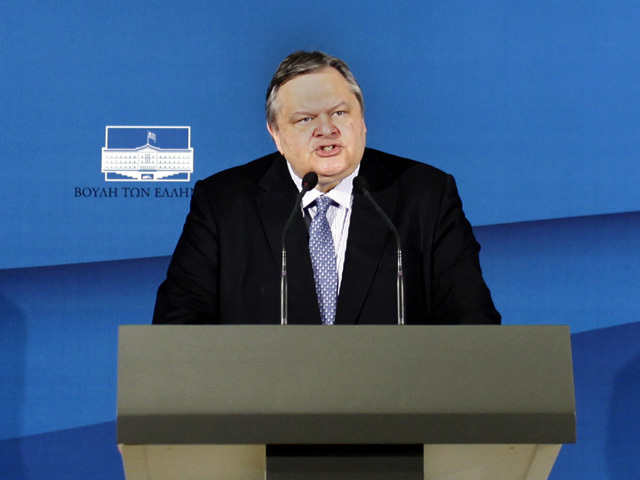 (AP) ATHENS, Greece - A coalition government could be formed by mid-Wednesday in Greece, the head of the country's socialist party said Tuesday, easing the nation out of a political limbo as it struggles to deal with a financial crisis that is already affecting Europe's economy and markets around the world.

Evangelos Venizelos' socialist PASOK party came third in Sunday's elections. At the core of any administration will be Antonis Samaras' conservative New Democracy party, which came first in Sunday's vote and won 129 of Parliament's 300 seats — short of the 151 needed to govern alone.

The radical left Syriza party in second place, with 71 seats, has refused to join any government that will implement the terms of Greece's international bailout, under which the country has received billions of euros in rescue loans in return for deeply unpopular spending cuts and tax hikes.

Venizelos, who handled Greece's negotiations with its international creditors for several months last year as finance minister, said the government would have the support of the election winner, PASOK and the small Democratic Left party of Fotis Kouvelis, which won 17 seats.

"With Syriza's refusal, the only practical solution now is the creation of a government with the support of New Democracy, PASOK, and the Democratic Left," he said after several hours of negotiations. "I repeat that this government must be formed as soon as possible. As now things stand, this can be achieved by mid-day tomorrow."

His party, he said, "will support this government sincerely and will participate in it in the most beneficial way in order to make it effective and credible."

PASOK would convene its deputies Wednesday morning to define exactly how the party would participate in the government, he said.

"The most important issue is not the government's composition, but the national negotiating team that will strive to achieve the best possible revision of the loan agreement so that we can keep all the positives and to counter the recession and unemployment and to bring positive growth and jobs," Venizelos said.

Although numerically Samaras could form a government with just PASOK, which has 33 seats, he has been seeking a broader alliance which would be seen as potentially more stable and better able to weather the continuing storm of austerity measures taken in return for Greece's bailout funds.

Such a government would broadly fulfill Greece's pledges to its bailout creditors for further cutbacks and reforms, keeping the country within Europe's joint currency. Otherwise, Greece would run out of cash and the continent could plunge deeper into a financial nightmare with global repercussions.

Greece is struggling through a fifth year of a deep recession, and has seen unemployment spiral to 22 percent.

The main sticking point promises to be how much Greece is willing to tempt fate by seeking a more lenient deal from creditors fed up with missed targets and broken reform pledges.