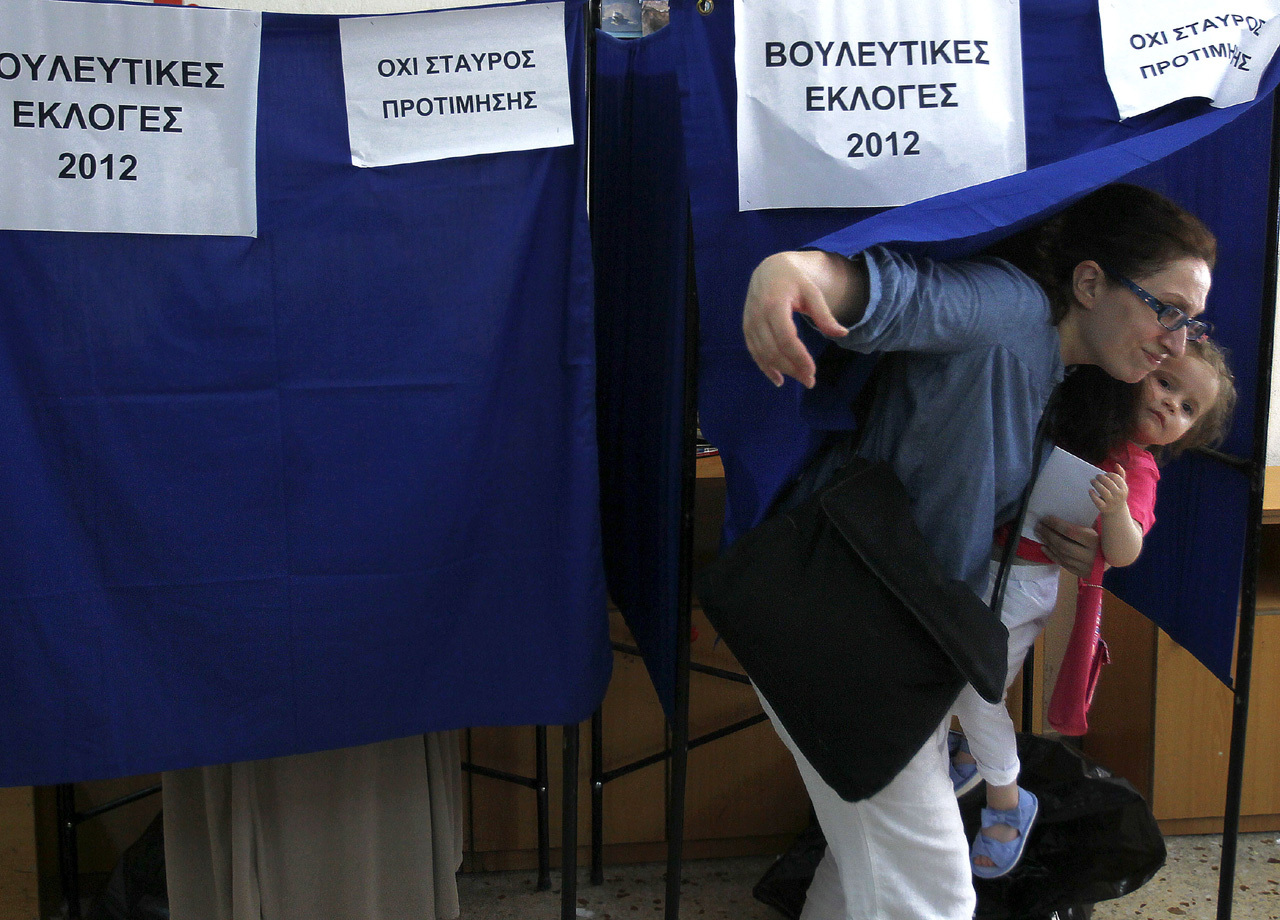 (AP) ATHENS, Greece - In an election crucial for Greece, Europe and the world, exit polls on Sunday showed the two top contenders in Greece to be neck-and-neck.

The outcome of Sunday's vote could determine whether Greece remains in the euro or is forced to leave the joint currency, a move that could drag down other European countries and have potentially catastrophic consequences for the global economy.

The exit polls showed that the conservative New Democracy party is projected to win between 27.5 and 30.5 percent of the vote while the anti-bailout radical left Syriza party may get 27 to 30 percent.

Syriza head Alexis Tsipras has vowed to cancel the terms of Greece's international bailout deal and repeal its austerity measures — a move many think will force Greece to leave the 17-nation eurozone. New Democracy leader Antonis Samaras says his top priority is to stay in the euro but renegotiate some terms of the bailout.

Whichever party comes first in Sunday's vote gets a bonus of 50 seats in the 300-member Parliament.

Greek election may decide future in eurozone
Greeks, Spaniards withdraw euros by the billions
British chancellor: "Moment of reckoning" for Europe this summer

As central banks stood ready to intervene in case of financial turmoil, Greece held its second national election in just six weeks to try to select a new government after an inconclusive ballot on May 6.

The two parties vying to win have starkly different views about what to do about the 240 billion euros ($300 billion) in bailout loans that Greece has been given by international lenders. One wants to tear up the deals and void the harsh austerity measures demanded by lenders that have caused Greek living standards to plummet. The other backs the bailout deal but wants to amend it.

The choice — the most critical in decades — could determine whether Greece abandons the joint euro currency and returns to its old currency, the drachma. But there are no rules governing a country's exit from the eurozone, and a Greek exit could spark a panic that other debt-strapped European nations — Portugal, Ireland, Spain and Italy- might also have to leave.

That domino scenario — known in economic terms as contagion — could engulf the euro, causing a global financial panic not unlike the one that gripped the world in 2008 after the investment firm Lehman Brothers failed in the U.S.

The vote Sunday was also coming after a difficult week for Spain and Italy, which saw their borrowing costs soar. Tens of thousands of Italian workers rallied Saturday in Rome to protest pension cuts, tax hikes and labor reforms.

The big question Sunday was how far deep Greek anger at the bailout terms would propel the radical left, anti-bailout Syriza party led by 37-year-old Alexis Tsipras. But no party is likely to win enough votes to form a government on its own, meaning a coalition will have to be formed to avoid yet another election.

"I'd like to see something change for the country in general, including regarding the bailout," said Vassilis Stergiou, a voter in Athens. "But at least for us to get organized and at the very least do something."

Inconclusive elections on May 6 resulted in no party winning enough votes to form a government, and coalition talks collapsed after 10 days. The vote, which also sent the formerly governing socialist PASOK party plunging to historic lows, sent a very clear message that Greeks have lost patience with the deep austerity imposed in return for the bailouts.

Tsipras, a former student activist, has vowed to rip up Greece's bailout agreements and repeal the austerity measures, which have included deep spending cuts on everything from health care to education and infrastructure, as well as tax hikes and reductions of salaries and pensions.

But his pledges, which include canceling planned privatizations, nationalizing banks and rolling back cuts to minimum wages and pensions, have horrified European leaders, as well as many Greeks. Tsipras' opponents argue that the inexperienced young politician is out of touch with reality, and that his policies will force the country out of the euro and lead to poverty for years to come.

Virtually unknown outside of Greece four months ago, Tsipras and his party shot to prominence in the May 6 vote, where he came a surprise second and quadrupled his support since the 2009 election.

Journalists and television news crews from across the world jostled for space to see Tsipras vote Sunday in Athens.

The young left-wing leader has accused his rivals of attempting to terrorize the population by casting him as the man who will ruin the country. He insists he will keep Greece within the euro — something that opinion polls have shown about 80 percent of Greeks want — but European leaders have made it clear there is no room for Greece to reject the bailout and stay in the eurozone.

Greece has been dependent on the rescue loans since May 2010, after sky-high borrowing rates left it locked out of the international markets following years of profligate spending and falsifying financial data. The spending cuts made in return have left the country mired in a fifth year of recession, with unemployment spiraling to above 22 percent and tens of thousands of businesses shutting down.

Samaras, meanwhile, has cast Sunday's choice as one between the euro and returning to the drachma. He has vowed to renegotiate some of the bailout's harsher terms but insists the top priority is for the country to remain in Europe's joint currency.

Separately, Greek police were investigating the discovery Sunday of two unexploded hand grenades outside private Skai television station on the outskirts of Athens. Greek government spokesman Demetris Tsiodras denounced the action as an attempt to spoil the smooth running of the elections.

Police also said they have notified Twitter about a forged message purportedly sent out by Greece's Communist Party urging voters to cast their ballots for Syriza.

Strong winds in the Greek archipelago also forced the cancellation of some ferry routes Sunday, raising doubts about whether some voters would be able to get to island polling stations.