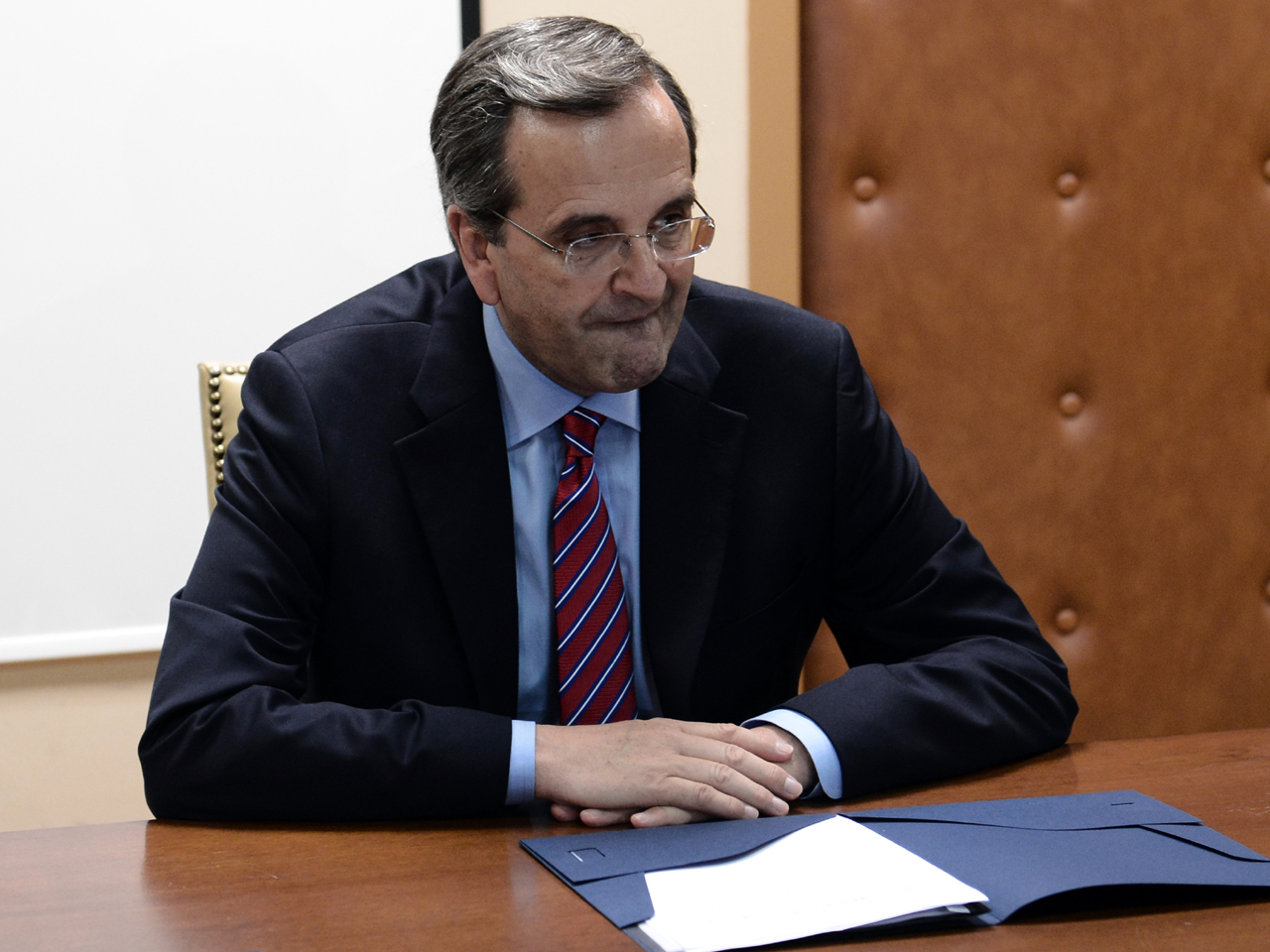 (AP) ATHENS, Greece - Greece's prime minister held a new round of negotiations Monday with representatives of the country's bailout creditors, who are demanding a fresh round of controversial austerity cuts.

Antonis Samaras' meeting with officials from the so-called troika of the European Union, International Monetary Fund and European Central Bank comes a day ahead of his talks in Frankfurt with ECB president Mario Draghi.

"It's a tough discussion, because the measures are tough," he told journalists after attending Monday's negotiations. Asked whether Greece's creditors are insisting on job cuts in the country's bloated, inefficient civil service, Stournaras only commented that: "We are trying to convince them that our arguments are correct."

In talks with Stournaras Sunday, troika officials rejected part of the Greek proposals, and Samaras is now engaged in a two-front effort with creditors and his coalition allies to hammer out the measures, without which Athens will lose its vital bailout funds.

Debt-crippled Greece has been kept afloat by rescue loans from its European partners and the IMF since May 2010. As a necessary condition for the money to keep flowing, it has repeatedly cuts pensions and salaries, hiked taxes, watered down labor laws in benefit of employers and raised the retirement age - incurring deep resentment that led to a series of strikes, and protests, many violent.

The bulk of the new unpopular savings - which have still to be approved by minority partners in Samaras' conservative-led coalition - are expected to come from pension and civil service pay cuts. Samaras' two center-left coalition partners say they want to protect low-income Greeks from further pain, and rule out across the-board pension cuts.

A further sticking point is layoffs in the public sector, which employs about one in four Greeks and guarantees them jobs for life. At the same time, hundreds of thousands of jobs have been lost in the private sector, with more than 1.2 million people, or 24.4 percent of the workforce, out of a job in June.

Samaras will hold a new effort Wednesday to talk minority partners into backing the cutbacks. The governing coalition was formed in late June, with all three parties pledging to respect Greece's bailout commitments but seek easier terms, including a two-year extension in the deadline for the new cuts.

Labor unions strongly oppose the new measures, with the main ADEDY civil servants' union saying Monday it planned to call a general strike "in the immediate future," together with the GSEE umbrella public sector union.

On Monday, university professors launched a two-day strike in the midst of the autumn exam period, while staff at technical universities will walk off the job all week. Academics say in some cases the new cuts will take more than 25 percent off their pay - which has already been reduced by 25 percent over the past two years.

On Saturday, an estimated 20,000 people took part in largely peaceful anti-austerity marches organized by GSEE, ADEDY and other groups in the northern city of Thessaloniki.