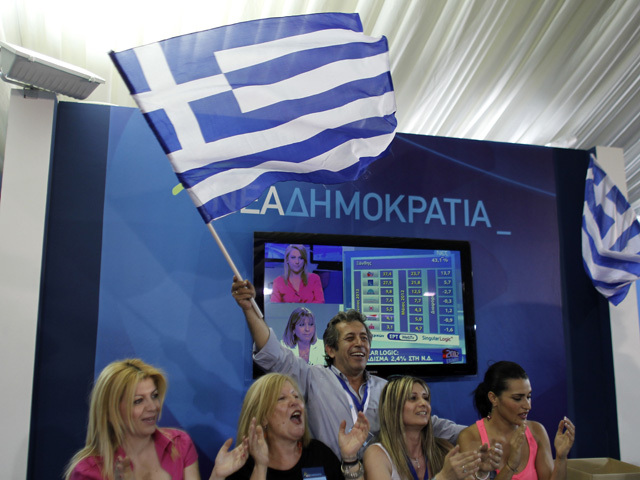 As central banks stood ready to intervene in case of financial turmoil, Greece held its second national election in six weeks after an inconclusive ballot on May 6 and the subsequent collapse of coalition talks.

With one party advocating ripping up Greece's multibillion-euro bailout deal, Sunday's election was seen as a vote on whether Greece should stay in the 17-nation group sharing the euro currency. A Greek exit would have had potentially catastrophic consequences for other ailing European nations, the United States and the entire global economy.

Sunday's results "will probably ease fears of an imminent Greek euro exit," said Martin Koehring of the Economist Intelligence Unit. "There will probably be a relief rally tomorrow in the financial markets. But the key question is how quickly can a government be formed?"

Stock analysts, however, warned that any bounce for financial markets could be short-lived.

"Treat knee-jerk market rallies with caution," Neil MacKinnon, a global macro strategist at VTB Capital, advised clients, saying there was still too many questions about Europe's debt crisis to celebrate the Greek vote.

The United States welcomed the result. "We hope this election will lead quickly to the formation of a new government that can make timely progress on the economic challenges facing the Greek people," the White House said in a statement.

Greece's parties have starkly different views about what to do about the euro240 billion ($300 billion) in bailout loans that Greece has been given by other European countries and the International Monetary Fund, and the harsh austerity measures that previous Greek governments had to accept in return for the loans.

With none winning an outright majority, the parties will have to seek coalition partners to form a viable government, needing a simple majority of at least 151 seats. New Democracy will get the first stab at brokering a partnership on Monday.

Negotiations could be tough. PASOK leader Evangelos Venizelos, who spent months negotiating bailouts as Greece's finance minister, has suggested dumping the usual procedure of each party seeking coalition partners. He said a government must be formed quickly and suggested a four-party coalition between New Democracy, Syriza, PASOK and the small Democratic Left, which was in sixth place with 6.3 percent of the vote and 17 seats.

"There is not one day to lose. There is no room for party games. If we want Greece to really remain in the euro and get out of the crisis to the benefit of every Greek family, it must have a government tomorrow," Venizelos said.

PASOK officials said Venizelos would insist on Syriza joining any future coalition, despite its anti-bailout stance -- although the move could simply be a negotiating tactic to convince the public that Syriza was unwilling to play a constructive role in pulling Greece out of its crisis.

But Syriza leader Alexis Tsipras, a 37-year-old former student activist, has ruled out such a possibility.

Tsipras phoned New Democracy leader Antonis Samaras Sunday night to congratulate him on his victory and vowed that his party would remain outside the government.

"We will be present in these developments from the position of the main opposition," he said in a speech to cheering party supporters in Athens.

Samaras cast Sunday's choice as one between keeping the euro and returning to Greece's old currency, the drachma. He has vowed to renegotiate some of the bailout's harsher terms but insists the top priority is for the country to remain in Europe's joint currency.

"The Greek people today voted for Greece to remain on its European path and in the eurozone," Samaras said.

Tsipras, who had tapped into a vein of deep anger over the plunging living standards faced by many Greeks, had wanted to rip up Greece's bailout deals and roll back many of the new taxes and job and pension cuts imposed in the last two years.

Germany's Finance Minister Wolfgang Schaeuble called New Democracy's victory a decision to "forge ahead" with implementing far-reaching reforms. Germany's foreign minister said it was important for Greece to stick to its agreements with creditors, but held out the prospect that Athens might be given more time to comply with them.

Germany -- Europe's biggest economy -- has been a major contributor to Greece's two multibillion-euro rescue packages and a key advocate of demanding tough, and highly unpopular, austerity and reform measures in exchange.

How much tolerance Greece's international lenders will show will be key to future developments, Koehring said.

"The New Democracy party has already said they want to renegotiate the bailout. The big question is how much cooperation can they expect from the EU and the IMF?" he asked. "We think they will probably be able to extend the terms."

Greece has been dependent on rescue loans to operate since May 2010, after it was locked out of international markets following years of profligate spending and falsifying financial data. The country is mired in a fifth year of recession, with unemployment spiraling above 22 percent and tens of thousands of businesses shutting down.

Greece had to agree to austerity measures to get the loans, including deep spending cuts on everything from health care to education and infrastructure, as well as tax hikes and cuts in salaries and pensions. Anger at the measures has sent Greeks into the streets in frequent strikes and protests, some of them violent.

The vote Sunday went smoothly except for one incident in which 10 men attacked a polling station in Athens with sledgehammers and wooden bats, wounding two policemen and setting fire to the ballot box.

Virtually unknown outside of Greece four months ago, Tsipras and his party shot to prominence in the May 6 vote, where he came in a surprise second. But his anti-bailout pledges horrified European leaders as well as many Greeks.

Experts said his proposals would lead to Greece getting tossed out of the eurozone and immediate, severe economic hardship at home for years.

It's still not clear that Greece can stay in the eurozone. Some prominent economists such as Nouriel Roubini of New York University's Stern School of Business believe that Greece must leave eventually to avoid a disaster for the rest of the eurozone.