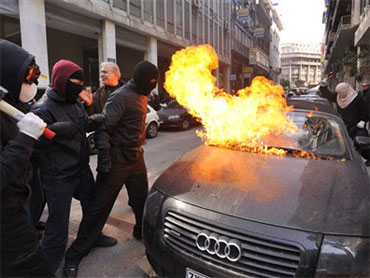 Serious street clashes erupted between rioting youths and police in central Athens Thursday as tens of thousands demonstrated during a nationwide strike against the cash-strapped government's austerity measures.

Hundreds of masked and hooded youths punched and kicked motorcycle police, knocking several off their bikes, as riot police responded with volleys of tear gas and stun grenades.

The violence spread after the end of the march to a nearby square, where police faced off with stone-throwing anarchists and suffocating clouds of tear gas sent patrons scurrying from open-air cafes.

Rioters used sledge hammers to smash the glass fronts of more than a dozen shops, banks, jewelers and a cinema. Youths also set fire to rubbish bins and a car, smashed bus stops, and chopped blocks off marble balustrades and building facades to use as projectiles.

Organizers said some 60,000 people took part in the protest. But an unofficial police estimate set the crowd at around 20,000 - including those that took part in a separate, peaceful march earlier Thursday. Police do not issue official crowd estimates for demonstrations.

Thursday's strike - the second in a week - brought the country to a virtual standstill, grounding all flights and bringing public transport to a halt. State hospitals were left with emergency staff only and all news broadcasts were suspended as workers walked off the job for 24 hours to protest spending cuts and tax hikes designed to tackle the country's debt crisis.

Riot police made heavy use of tear gas during the start-and-stop clashes throughout the demonstration, including outside Parliament. Strikers and protesters banged drums and chanted slogans such as "no sacrifice for plutocracy," and "real jobs, higher pay." People draped banners from apartment buildings reading: "No more sacrifices, war against war."

The demonstrators included hundreds of black-clad anarchists in crash helmets and ski masks, who repeatedly taunted and attacked riot police with stones and petrol bombs, at one point spraying officers with brown paint. Shopkeepers along the demonstration route hastily rolled down their shutters, while a few blocks away, people sat at outdoor restaurants, nonchalantly continuing their meals.

Minor clashes also broke out in the northern city of Thessaloniki, where about 14,000 people marched through the center.

Fears of a Greek default have undermined the euro for all 16 countries that share it, putting the Greek government under intense European Union pressure to quickly show fiscal improvement.

It has announced an additional euro4,8 billion ($65.33 billion) in savings through public sector salary cuts, hiring and pension freezes and consumer tax hikes to deal with its ballooning deficit, but the measures have led to a new wave of labor discontent.

The cutbacks, added to a previous euro11.2 billion ($15.24 billion) austerity plan, seek to reduce the country's budget deficit from 12.7 percent of annual output to 8.7 percent this year. The long-term target is to bring overspending below the EU ceiling of 3 percent of GDP in 2012.

The new plan sparked a wave of strikes and protests from labor unions whose reaction to the initial austerity measures had been muted. Thursday's strike shut down all public services and schools, leaving ferries tied up at port and suspending all news broadcasts for the day. However, some private bank branches were open despite calls from the bank employees' union to participate in the strike.

While their colleagues clashed with groups of protesters, some police joined the demonstration.

About 200 uniformed police, coast guard and fire brigade officers, who cannot go on strike but can hold protests, gathered at a square in the center of the city shortly before the marches got under way.

"The police and other security forces have been particularly hard hit by the new measures because our salaries are very low," said Yiannis Fanariotis, general secretary of one police association. He said the average policeman made about euro1,000-euro1,200 ($1,360-$1,635) a month if weekend and night shifts were included.

Joining the protest "doesn't feel strange, because we are working people like everybody else and we are all shouting out for our rights," he said.

The government says the tough cuts are its only way to dig Greece out of a crisis that has hammered the common European currency and alarmed international markets - inflating the loan-dependent country's borrowing costs.

But unions say ordinary Greeks are being called to pay a disproportionate price for past fiscal mismanagement.

"They are trying to make workers pay the price for this crisis," said Yiannis Panagopoulos, leader of Greece's largest union, the GSEE.

"These measures will not be effective and will throw the economy into deep freeze."

A general strike last Friday was marred by violence during a large protest march. Riot police used tear gas and baton charges against rock-throwing protesters, who smashed banks and storefronts, while left-wing protesters roughed up Panagopoulos as he was addressing a rally.

The labor unrest could spark fears that the government will have trouble in implementing its new measures.

Greece insists it doesn't need a bailout, and its European partners are reluctant to fund one. But it has called for European and international support for its program, saying that unless it receives that support and the cost for it to borrow on the market falls, it might have to appeal to the International Monetary Fund for help.

On Wednesday night, Deputy Prime Minister Theodore Pangalos said Greece could bypass the costly process of borrowing from edgy markets by urging international institutions to buy its bonds at a set interest rate.

"We want, if there is an unjustified speculative attack against Greek bonds, to know that one of these institutions that have the substantial means to absorb such market products will come and say 'look here, I am buying Greek bonds at this price, with this interest rate,"' Pangalos told private Mega TV.

He did not say which institutions he was referring to, or elaborate on the interest rate.

Markets think some kind of rescue would be organized if default looms. Speculation has focused on possible guarantees for Greek bonds or help from state-owned banks in other eurozone countries.