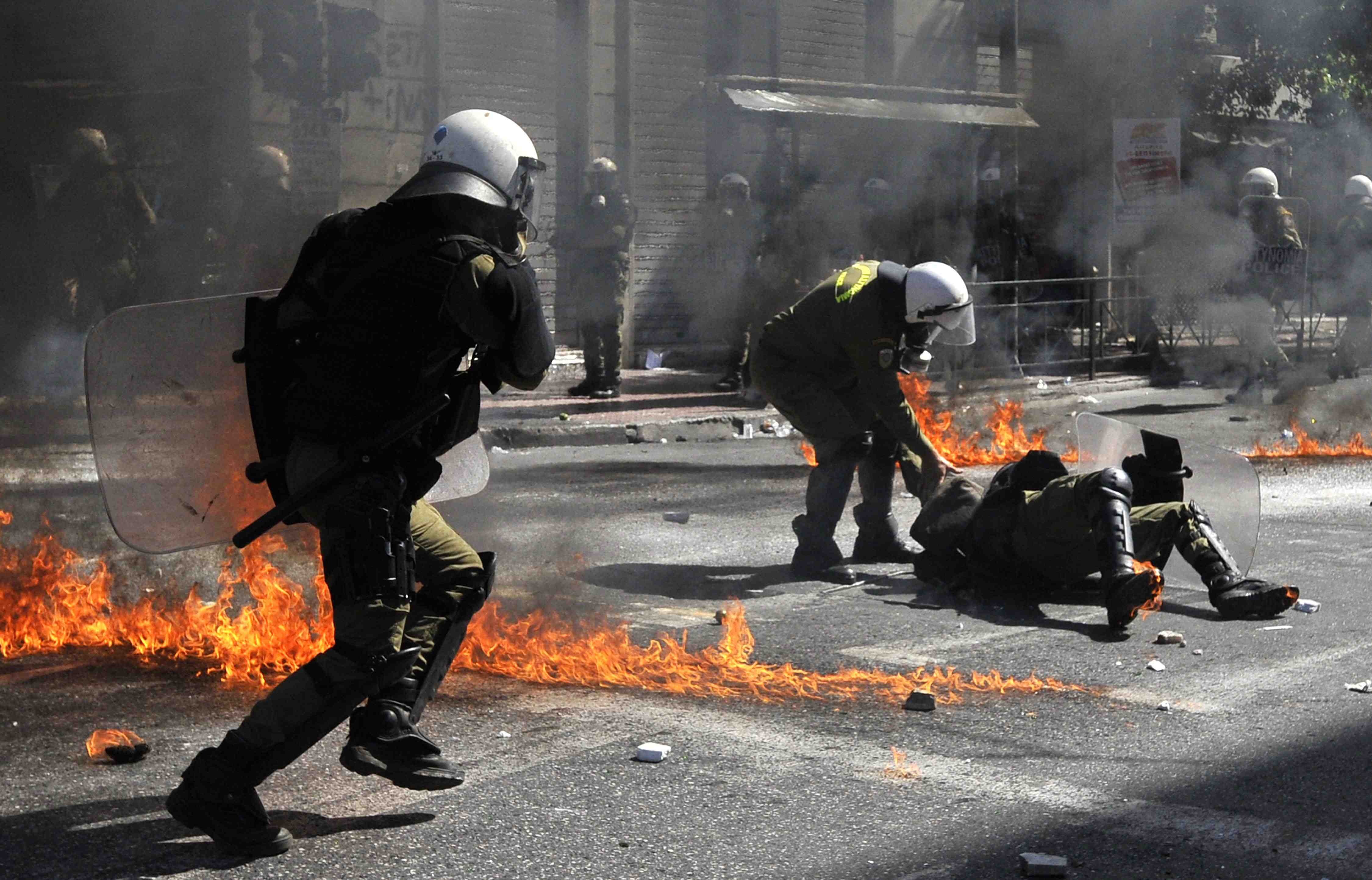 Riot police used tear gas and pepper spray against several hundred demonstrators after the violence broke out near the country's parliament. Protesters also set fire to trees in the National Gardens and used hammers to smash paving stones and marble panels to use as missiles against the riot police.

Tens of thousands of Greeks marched through central Athens Wednesday in the first general strike since the country's coalition government was formed in June, as the prime minister and finance minister hammered out a package of euro11.5 billion ($14.87 billion) in essential spending cuts.

Everyone from shopkeepers and pharmacists to teachers, customs workers and car mechanics joined the demonstration of about 50,000 people in a strike seen as a test of public tolerance for more hardship after two years of harsh spending cuts and tax hikes.

"People, fight, they're drinking your blood," protesters chanted as they banged drums.

The Greek strike comes a day after clashes with police during an anti-austerity demonstrations in Spain left 64 people injured.

Greece's politicians have struggled to come up with more austerity measures that would be acceptable to the country's rescue creditors, with disagreements arising between the three parties that make up the coalition government. The country has been dependent on international rescue loans from other eurozone countries and the International Monetary Fund since mid-2010. Without the loans, Greece would be forced into a chaotic default on its debts and into an exit from the 17-country bloc that uses the euro.

The country's lenders have demanded more fiscal reforms if they are to continue handing out rescue loans. The next payment of euro31 billion hinges on the government agreeing to further cuts.

The other two party leaders were to be briefed by Samaras on Thursday, a party official said. Both spoke on condition of anonymity because they were not authorized to speak on the record.

Wednesday's strike shut down the Acropolis, Greece's most famous tourist site, and halted flights for hours. Ferry services were suspended, schools, shops and gas stations were closed and hospitals were functioning on emergency staff.

"How can you survive on 600 a month, with ever-rising taxes, and continue to pay bills and buy necessary supplies? If the washing machine breaks down, where do you get the money for repairs?"

Betses said hospitals have been hard hit by spending cuts, with staff shortages and long delays in doctors' overtime pay for night shifts.

"The resentment has been there for long before the new measures. Imagine what will happen when they're made public," he said.