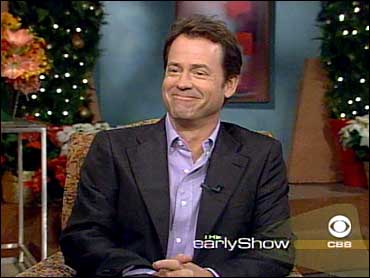 For years, Greg Kinnear made us laugh with his unique commentary on "Talk Soup" and went on to win an Academy Award nomination for his performance in "As Good As It Gets." In "The Matador," he portrays a traveling businessman whose chance meeting with a professional assassin sets him up for an experience of a lifetime.

When he sat down during a visit to The Early Show to talk to co-anchor Harry Smith, he began by comparing his character's eyeglasses to those Smith wears.

"I'm looking at yours and saying, 'I may have made a slight miscalculation with the glasses.' I like yours better," said the actor.

Smith observed that the glasses Kinnear wears in the movie suit the character fine because, "You're a weenie. You're kind of a weenie."

"Well, Harry, thank you," Kinnear said. "There is something like kind of … woefully sad about this particular guy, Danny. He's a guy struggling. He's had some personal tragedy. And he's just trying to finally put the last two pieces together that will make his life, in some ways, complete. And of course that doesn't happen. And in steps a hit man."

When Danny goes down to Mexico to make a deal that's going to change his life, complications ensue. At a bar, he has a chance encounter with Julian Noble (played by Pierce Brosnan), an assassin who is not quite James Bond.

"Yes, he's a hit man," Kinnear confirmed. "A fatality facilitator, as he likes to say. And there's something so believable about him in this role. And it is so different from Bond."

Smith pointed out that, in some reviews of the movie, critics are saying this is the best work Brosnan has ever done.

"It turned out very well," said Kinnear. "We shot it in Mexico City … over a year ago, a year and a half ago. I had never been there before. It's a very kind of strange and exotic place … And I think, for all of us, we were in such foreign territory down there with such an odd script, there were a lot of strange things being channeled in the movie."

Kinnear said the script reads more like a play than a movie. "And I don't want people to be turned off by that: 'Aw, honey, I think we will go see "Armageddon 6" instead.' Doesn't sound like I'm selling it so well, does it?"

Smith quipped, "There are guns in it."

"There are some guns," Kinnear said. "But it really is the play on words that is the strength of the piece, and the characterization of these two guys. And, of course, my wife, played by Hope Davis quite beautifully."

He said Davis is "a whole other sort of life force in this thing. And how these three people interact and how they could possibly, possibly coexist in kind of the moments they do."

But Kinnear pointed out, "You know, it will never be out because we could never clear all of those people. You know TV. You know what I'm talking about."

Kinnear has a couple of other movies in the can, both in post-production and scheduled to be released this year: "Invincible," in which he played Eagles coach Dick Vermeil, and "Little Miss Sunshine," which also stars Steve Carell, about a family that is determined to get their young daughter into the finals of a beauty pageant.