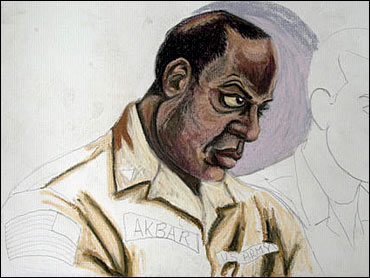 An investigating officer Friday recommended the court-martial of a soldier charged in the grenade attack on 101st Airborne soldiers in Kuwait that killed two and injured 14 others.

Sgt. Hasan Akbar, a 32-year-old Muslim from the 101st Airborne Division, is accused in the attack on three tents on March 23 at Camp Pennsylvania in Kuwait days before the brigade moved into Iraq.

The announcement followed closing arguments in the Article 32 hearing, a preliminary session in any military prosecution.

"There are reasonable grounds to believe the accused committed the offensive charges," Col. Patrick Reinert said. "This was a surprise attack executed by stealth."

DeLuca will next make a decision how the case will proceed and has the option to dismiss the case. If he recommends a court-martial, it would have to be ordered by Maj. Gen. David Petraeus, commanding general of the 101st.

Maj. Trey Cate, 101st spokesman, said he does not know when DeLuca — who is in Iraq — would make a decision.

It is the first time since the Vietnam War that a U.S. Army soldier has been prosecuted for the murder or attempted murder of another soldier during a period of war, the Army said.

Akbar could face the death penalty if convicted at a court-martial. His lawyers have not spoken publicly about the case.

During the hearing, Akbar declined to take the stand in his own defense.

Akbar's attorney said no eyewitnesses placed the soldier at the scene, and that soldiers on the ground unduly assumed he committed the crime because he is Muslim.

"Nobody, not one witness, can say they saw Sgt. Akbar throw a grenade or fire a weapon," Lt. Col. Victor Hansen argued.

Capt. Harper Cook, an attorney for the prosecution, said Akbar stole four fragmentation grenades and three incendiary grenades from a Humvee he was guarding, then an hour later walked to the brigade operations area to conduct the attack on three tents.

"He selected the weapons, he pulled the pins, he threw the grenades and he shot Maj. (Kenneth) Romaine with his rifle," Cook said. Romaine was wounded in both hands and his left thigh by a gunshot in the attack, he testified.

Cook also said Akbar was injured in the leg during the attack, but chose not to seek treatment because he wanted to blend in with other soldiers.
Among the witnesses at the hearing were soldiers on the scene during the deadly attack.

Command Sgt. Maj. Bart Womack testified Thursday that he took Akbar's rifle after the soldier was detained and placed it outside one of the tents at the crime scene.

"I felt that was evidence, no doubt about it," Womack said.

Staff Sgt. David Maier, an Army investigator, testified earlier this week that casings fired from the rifle found at the scene matched fragments from one dead soldier's fatal wound.

Comrades of Akbar also testified this week that they were concerned about his mental state before the attack.

Air Force Maj. Gregory Stone, 40, and Capt. Christopher Scott Seifert, 27, died in the attack. In addition to their murders, Akbar was also charged with one count each of aggravated arson of an inhabited dwelling and misbehavior as a sentinel while receiving special pay.

There are six people on the military's death row, but there have been no military executions since April 13, 1961, when Army Private John Bennett was hanged to death for rape and attempted murder.