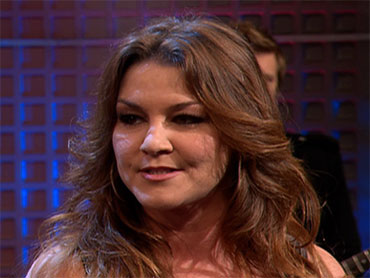 Multi-platinum recording artist Gretchen Wilson exploded onto the country music scene in 2004 with her smash hit "Redneck Woman." Now the Grammy award winning singer has three No. 1 albums under her belt and is heating up the charts with her latest single, "Work Hard, Play Harder" off her new CD "I Got Your Country Right Here," which is in stores now.

In addition to her singing career, Wilson is a single mom of a 9-year-old named Grace.

Wilson says she wants her daughter, who is already showing signs of creativity and talent, to wait and "be a kid first."

But Wilson grew up fast. She was only 15 when she started singing. Wilson says she's from a very driven family, but particularly from her grandparents.

She said, "My grandpa's motto was if you don't go to be completely exhausted, you've wasted a day."

She continued, "I've just learned that throughout the years nothing out there that's good really comes easy, you have to work for everything."

Wilson's persona in country music is of a hard, raw woman. But how much of that is really real?

"I'm pretty much what you see is what you get," she said. "I've always just been who I am. I've kind of based everything on just being honest and open and it's a lot easier that way than trying to cover up your tracks and figure out what you've said before. Just be yourself."

For more with Gretchen Wilson, click on the video below.