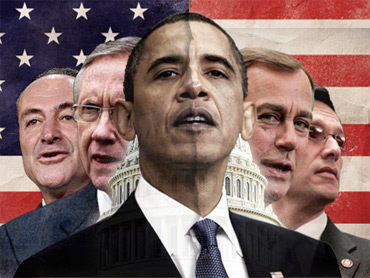 CBS News is projecting that when all the races are determined, the Republicans will control the House but Democrats will maintain control of the Senate.

Republicans needed 10 gains in the Senate to win control, but as of early Wednesday morning, they had only won six. CBS News cannot yet project a winner in Colorado, Washington or Alaska because these races are still too close to call. On the House side, Republicans had picked up 58 seats as of early Wednesday, with several left to be counted.

The GOP was able to pick up a Senate seat in Pennsylvania, where CBS projects Republican Pat Toomey will prevail over Democratic Rep. Joe Sestak. In Illinois -- in the battle for President Obama's old Senate seat -- Republican Mark Kirk is projected to win over Democrat Alexi Giannoulias.

CBS News further estimates that when all the votes are counted, Democrat Daniel Inouye will win the Hawaii Senate race.

In the House, Republicans have picked up well past the 39 seats needed to win the majority. The new balance of power will present a challenge for Mr. Obama as he attempts to continue with his agenda through the second half of his term, and it will give voters renewed expectations for progress in Washington.

Republicans won a meaningful House victory early on in the evening in Virginia, where Republican Robert Hurt won the race for the state's fifth district. At 8:30, Hurt led Democratic incumbent Tom Perriello 52 percent to 46 percent. Perriello ran unabashedly on his record of supporting President Obama's agenda, and his re-election bid was considered something of an indicator as to whether the Obama supporters who voted in 2008 would mobilize again this year.

The GOP's strategy this year was to pick off Democrats elected in 2006 and 2008 to put their victory together, according to CBS News Capital Hill correspondent Nancy Cordes. Along with Perriello, freshman Democratic Rep. Alan Grayson lost in Forida's eighth district to Republican Daniel Webster.

House Republican Leader John Boehner of Ohio, presumably the next speaker of the House, conducted a Skype call with Tea Party activists in his district tonight. "I'll never let you down," Boehner told the crowd in signing off.

GOP House Exactly What Obama Wanted to Avoid
PICTURES: The New Leaders of the House

In his calls with Boehner and McConnell, the president said he was "looking forward to working with him and the Republicans to find common ground, move the country forward and get things done for the American people."

"This election victory belongs to millions of Americans who stood up, spoke out and said 'enough is enough' and would no longer tolerate an imperial Congress that ignored the will of the people," he said in a statement. "House Republicans will welcome our new generation of leaders with open arms and work every day to deserve the confidence the American people have placed in us."

Why Key Midwest Swing States Flipped to the GOP
Rhetoric About Balancing the Budget Must now Become Reality
Did the Tea Party Cost Republicans the Senate
Pictures: Election Winners and Losers
GOP House Win "Slap in the Face" for White House

House Republican Whip Eric Cantor said on the CBS News Election Night Special that he hopes to see a repeal of the president's health care reform package go to the floor under Republican control.

President Obama was not expected to make any statements until a news conference Wednesday. "We expect a lot of words about compromise from the White House tomorrow," said CBS News chief White House correspondent Chip Reid.

What's Next for the Tea Party?

Republicans also picked up a seat in North Dakota, where John Hoeven won the seat being vacated by retiring Democratic Sen. Byron Dorgan.

Democratic Sens. Patrick Leahy of Vermont and Ron Wyden of Oregon retained their seats, as did Republican Sens. Jim DeMint of South Carolina and Mike Crapo of Idaho.

Voters seem to be willing to put Republicans back in power after growing impatient with the poor economy and high unemployment rates that have lingered under Democratic control.

"Dissatisfaction with the economy and performance of the government is the key to the whole night," said Jeff Greenfield, CBS News Senior Political Correspondent.