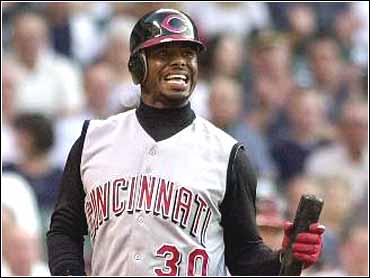 Ken Griffey Jr. didn't do anything that could be questioned Thursday, a day after he bristled at an announcer's criticism.

Cincinnati Reds manager Jack McKeon gave Griffey a day off as planned, only his second this season. He watched from the bench as the Reds beat the Philadelphia Phillies 8-3 Thursday afternoon.

The day off was unrelated to his blowup with Hall of Fame announcer Marty Brennaman before the previous night's game. Griffey repeated Thursday that he doesn't want to be known as someone who loafs.

"I'm not some person who wants to be treated as a superstar and won't go out and help the team," Griffey said. "That's not what I want to be known as - a guy who doesn't want to play and is moody."

Brennaman declined to comment on the matter Thursday, saying he was disappointed that his clubhouse disagreement with Griffey had been reported.

Brennaman, known for his blunt assessments, sharply criticized Griffey on the air Sunday after he failed to run hard on a single that might have been stretched to a double. Griffey rarely runs hard to first base.

After hearing about the comment secondhand, Griffey mentioned it to Brennaman in the clubhouse with reporters but no teammates present during batting practice Wednesday.

Griffey suggested he's been bothered by a sore hamstring, but Brennaman pointed out to him that he's run hard at other times.

The conversation grew heated and included profanities. Brennaman told Griffey he would continue to criticize him whenever he gave less than his best effort.

"The next time you don't run hard to first base, I'll point it out again," Brennaman said.