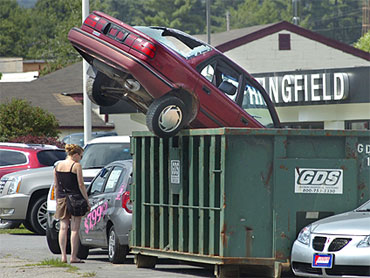 (AP Photo)
Hundreds of thousands of people around the country are flocking to car dealerships, eager to rid themselves of their "clunkers" in favor of newer, sleeker, more fuel efficient alternatives – with government help of course.

But as those people drive off the lots, ensconced in new car smell, a question lingers: what happens to all the clunkers? According to a Wall Street Journal report Tuesday, the answer is simple – government-ordered execution. Death by sodium silicate.

Before dealers can get their hands on government reimbursements for the rebates they've been doling out to qualified car-owners, they must agree to "kill" the clunkers so they never see the road again. And that has to be done in accordance with an extensive government outline, which calls for the engines to be drained of oil and filled instead with two quarts of sodium silicate.

The sodium silicate, often called liquid gas and usually used to stop leaks in the same engines it's now destroying, is turned into a solid by the engine's heat. In that state, it wreaks havoc on engine parts, rendering them useless and beyond repair.

The government mandating the use of sodium silicate for the destruction of these old cars has been a boon for chemical companies that had previously sold only marginal amounts of the substance, according to the report.

One company, CQ Concepts Inc., sold 15,000 gallons of sodium silicate last week, up from a usual 200 gallons, according to the story. A typical car-killing dose runs about $5.

"At one point this week I worked 32 hours without a break," Robert Mueller, the owner of the suburban Chigago-based company, told the Journal.

And the chemical companies aren't the only ones enjoying the destruction. As it turns out, dealership mechanics are getting quite a kick out of it too.

As Jim Burton, service manager of Randy Curnow Buick Pontiac GMC in Kansas City, Kan. told the Journal: "Everybody wants to go first, so I'm probably going to have to make them draw straws. … I can't wait." 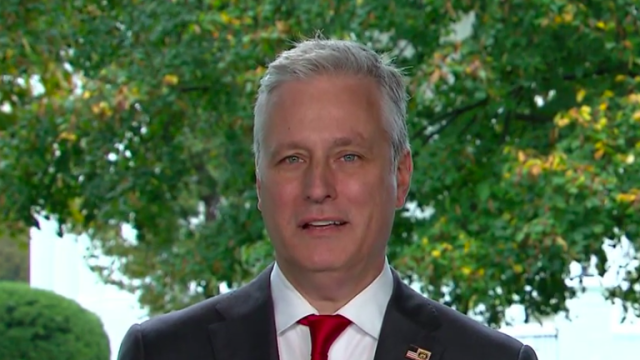 The following is a transcript of an interview with national security adviser Robert O'Brien that aired Sunday, October 25, 2020, on "Face the Nation."