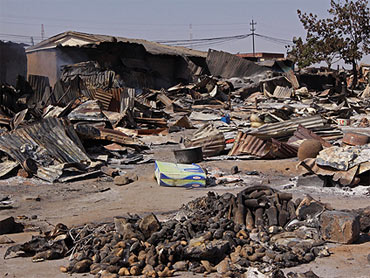 Charred bodies with scorched hands reaching skyward lay in the streets and a mosque with blackened minarets smoldered Wednesday after several days of fighting between Christians and Muslims killed more than 200 people.

Sectarian violence in this central region of Nigeria has left thousands dead over the past decade, and the latest outbreak that began Sunday came despite the government's efforts to quell religious extremism in the West African country.

Jos was mostly calm Wednesday, though many terrified civilians kept indoors while soldiers patrolled the streets. The city is situated in Nigeria's "middle belt," where dozens of ethnic groups mingle in a band of fertile and hotly contested land separating the Muslim north from the predominantly Christian south.

There are conflicting accounts about what unleashed the bloodshed. According to the state police commissioner, skirmishes began after Muslim youths set a Christian church ablaze, but Muslim leaders denied that. Other community leaders say it began with an argument over the rebuilding of a Muslim home in a predominantly Christian neighborhood that had been destroyed in November 2008.

Corinne Dufka, senior West Africa researcher at Human Rights Watch, said what caused the latest spark was beside the point. The deeper problem, she said, is the government's failure to address underlying conflict in the region.

After similar bouts of violence in the past, Nigerian authorities have "come up with analysis, but they don't respond properly with concrete measures and policies," Dufka said. "Tensions seethe, and months or years later you have another outbreak."

More than 13,500 Nigerians have died in sectarian violence in the last decade, and at least 2,500 people had been killed in Plateau state alone since 2001, according to Human Rights Watch. Dufka said no one has been held accountable, leading to a climate of impunity.

"It's not just the perpetrators who often murdered people in horrific ways who have not been held accountable, but also the political leaders and sometimes the religious leaders that foment violence, as well as the security forces who've used excessive force to respond to it."

In Jos, witnesses said rioters armed with knives, homemade firearms and stones had attacked passers-by and fought with security forces, leaving bodies in the street and stacked in mosques after fighting began Sunday.

Authorities imposed a 24-hour curfew, but on Wednesday people could been seen walking around the center of the city. When an army convoy passed, they stopped and raised their hands above their heads to show they were not a threat.

"We want the government to come and help us," said Abdullahi Ushman, who said he had seen rioters attacking people with firearms and bows and arrows.

Plateau State governor Jonah Jang said the violence was not provoked by a lack of opportunity in this rural farming community. He claimed many of the attackers were from Muslim-dominant northern Nigeria and from the nearby, predominantly Muslim nations of Niger and Chad.

"There are people masterminding this for their own selfish reasons," said Jang, who is Christian.

The Minister of Police Affairs, Ibrahim Yakubu Lame, issued a statement Tuesday blaming the violence on "some highly placed individuals in the society who were exploiting the ignorance and poverty of the people to cause mayhem in the name of religion."

The chief of Army staff, Lt. Gen. Abdulrahman Danbazau, confirmed accounts that some Muslims had been dragged out of their homes and shot by men dressed in what appeared to be army uniforms. He said five of the suspects arrested were dressed in khaki army-style uniforms and claimed to be police officers, though only one of the five men could provide police identification.

Jos is not alone in being shaken by religious violence. In July, an extremist group known as Boko Haram - translated as "Western education is sacrilege" - attacked police stations and other government buildings, starting days of violence that left more than 700 people dead in northern Nigeria. Another wave of violence started by infighting in another Islamic extremist group left at least 38 people dead in December.

Still, nearly all violence caused by extremist sects comes from intensely local politics or grievances - not any call for holy war against the West.

The government has sought to distance itself from any al Qaeda links after a 23-year-old Nigerian was accused of trying to blow up a U.S.-bound flight on Christmas Day. Nigerian officials have said that Umar Farouk Abdulmutallab was influenced far beyond the nation's borders while studying in London and in Yemen.

Nnamdi Obasi, a Nigeria-based senior analyst for the International Crisis Group, said the government's response to previous cycles of violence in Jos has been to deploy soldiers without resolving the underlying tensions.

"There is poverty and desperation. So you very easily have mobs of young people ready to take out frustrations on other groups, especially when they can identify them as an opposing group, be it Muslim or Christian," Obasi said.