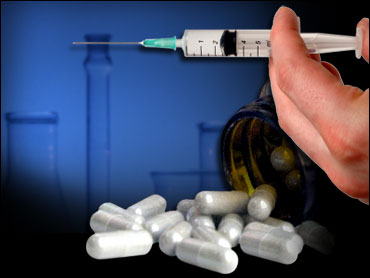 Recreational athletes who believe they are using a performance-enhancing drug but are actually taking a placebo or dummy pill think their performance will improve, according to a new study.

And in some, performance actually does improve, says Ken Ho, MD, PhD, head of the pituitary research unit at Garvan Institute of Medical Research in Sydney, Australia. Garvan is presenting the findings this week at ENDO 08, the 90th annual meeting of The Endocrine Society in San Francisco.

"It is probably the power of the mind that is giving you this benefit," Ho tells WebMD.

Ho's group conducted the study, knowing that doping with growth hormone is prevalent in sports but that scientific evidence is lacking on its effectiveness. They wondered if the placebo effect might explain why people believe it will help them.

Ho's team recruited 64 young adult recreational athletes, aged 20 to 40, randomly assigning them to receive either growth hormone (banned in sports) or an inactive placebo for eight weeks. They all exercised at least two hours a week and had done so for six months, Ho says.

"We wanted to know if any of the improvement [in their performance] was simply due to the belief they were actually taking something artificially."

Then they zeroed in only on those who had taken placebo.

"Among the group of 32 who received placebo, those who wrongly thought they were on growth hormone thought their performance improved," Ho says. "Their measured performance actually did improve."

The tests included endurance, strength, power, and sprint capacity. The test of power, gauged by jump height, was the only one to show a significantly greater improvement among those who incorrectly thought they were on growth hormone compared to those who correctly guessed they were on placebo, he says.

The group's performance as a whole improved about 1% or 2%, Ho says, which can be attributed to training. When he looked at just the performance of those who incorrectly thought they were on growth hormone, he found it improved 3% to 5%.

The study finding makes sense to Hau Liu, MD, MBA, MPH, associate chief of endocrinology and metabolism at Santa Clara Valley Medical Center, San Jose, who reviewed the study for WebMD. Earlier this year, he and his colleagues reviewed 44 scientific articles on growth hormone and concluded it may not enhance athletic performance, publishing their analysis in the Annals of Internal Medicine.

"We and others have wondered why athletes would use growth hormone, and speculated that the placebo effect might be contributing to an athlete's perceived or actual performance improvement," Liu says. "This study supports this hypothesis, and more work should be done to investigate these findings."

The study was funded by the World Anti-Doping Agency and the Australian Government Anti-Doping Research Program. The growth hormone was supply by Novo Nordisk.